1,400 people from J&K, Ladakh being evacuated from Iran: MEA 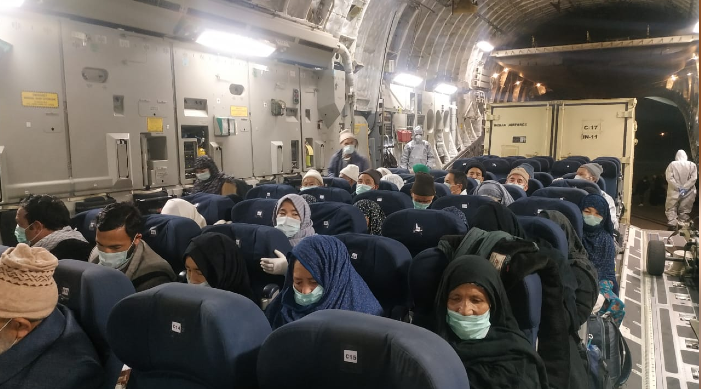 The government on Wednesday said that it is in the process of evacuating 1,400 Indian nationals, mostly residents of Ladakh and Jammu & Kashmir, from the coronavirus-hit Iran where around 300 people have died due to the outbreak.

In a statement tabled before the Rajya Sabha, Minister of External Affairs S. Jaishankar said of the 6,000 Indian nationals living in Iran, 1,100 were pilgrims mainly from Ladakh, Jammu & Kashmir and Maharashtra and 300 were students mostly from J&K and 1,000 were fishermen from Kerala, Tamil Nadu and Gujarat.

Around 9,000 people have been infected with the novel coronavirus across Iran. Due to the spike in coronavirus cases in Iran, as a precautionary measure, New Delhi temporarily suspended direct flights between India and Iran from February 27. Advisories were issued to avoid travel and returning passengers have been screened.

The minister said the Indian embassy in Tehran and consulates in Bandar Abbas and Zahidan reached out immediately to Indian nationals in Iran to ascertain their welfare and are in constant touch with them.

“The initial focus is on visiting pilgrims. Many of them are in Qom, where coronavirus incidence has been strong. Their age and the nature of their residency increases the risks of exposure. As their welfare is being currently addressed, we are now focusing on Indian students,” Jaishankar told the House. Many of the students, he said, are studying medicine.

The southern provinces of Iran, including cities of Asaalouyeh, Chiruyeh and Kish where most fishermen are located, the minister said, have not been affected so severely. “These factors will guide our approach in the coming days,” he said.

Given the scale of COVID -19 infection and its pressure on Iran’s resources, a team of six Indian health officials has been deputed to Iran in order to set up testing and sampling facilities there.

The first batch of 108 samples received in India on March 7 were tested. Fifty-eight Indian pilgrims (25 men, 31 women and 2 children), who tested negative, were repatriated in special IAF C-17 flight on March 10, the minister said.

The government has got samples of another 529 Indians for testing at National Institute of Virology, Pune. “We continue to collect more samples in Tehran and our endeavor is to ensure the earliest possible return of our nationals after appropriate testing and screening. We are working with the Iranian authorities to operate some limited commercial flights for facilitating early return of the remaining Indians after testing them,” Jaishankar said.