Will work with all for Jammu and Kashmir statehood, says PM Narendra Modi 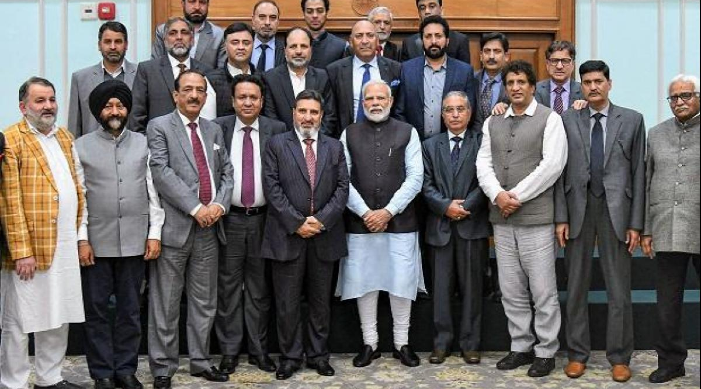 Prime Minister Modi made the statement at a meeting with a 24-member delegation of the newly formed Jammu and Kashmir Apni Party, led by its leader Altaf Bukhari

Prime Minister Narendra Modi said on Saturday that his government will work to restore the statehood of Jammu and Kashmir “at an early opportunity,” seven months after moving to divest its special status under the Constitution and reorganise it into two Union territories.

The Prime Minister made the statement at a meeting with a 24-member delegation of the newly formed Jammu and Kashmir Apni Party, led by its leader Altaf Bukhari, a day after setting free former chief minister Farooq Abdullah from detention under the tough Public Safety Act (PSA).

At the meeting at his residence on Saturday evening, Modi engaged with the delegation on issues including concerns on demographic change, a delimitation exercise in the newly formed Union territory of Jammu and Kashmir and grant of state domicile.

“Referring to his statement in Parliament, the Prime Minister underlined that the government will work with all sections of the population to realize the hopes of statehood for Jammu and Kashmir at an early opportunity,” said an official statement released after the meeting.

At the interactive session with the delegation, the Prime Minister also called for ‘Janbhagidari’ (people’s participation) in transforming Jammu and Kashmir and emphasised the importance of an administration that gives the people of the region a voice. He also said democracy in the region could be strengthened through rapid political integration, the statement said.

The formation of the Jammu and Kashmir Apni Party and the recent release of some detained political leaders including Abdullah have been seen as a possible prelude to the initiation of a political process in the erstwhile state, where a coalition government between the Peoples Democratic Party (PDP) and the Bharatiya Janata Party (BJP) collapsed in June 2018 after the BJP ended the alliance.

Bukhari told Hindustan Times that the meeting with Modi was encouraging.

“We are satisfied and positive after this meeting.I told PM Modi that there are apprehensions among the people that their land and jobs will be taken away and the PM assured us that nothing will happen to the land and jobs of people and bills will be passed to safeguard both very soon. I also raised issue of leaders and common people who are in different jails in the country,” Bukhari said.

In August last year, the BJP-led government at the Centre pushed through provisions nullifying Article 370 that limited Parliament’s powers to apply laws in the region except in the domains of defence, foreign affairs, finance and communications. Issues like ownership of property, fundamental rights and citizenship were covered under a separate law for Jammu and Kashmir. The government also decided to bifurcate Jammu and Kashmir into two Union territories -- J&K and Ladakh -- that were created on October 31.

Many political leaders of Jammu and Kashmir including three former chief ministers were detained, restrictions imposed on public movement and a communication blockade imposed on the region together with the nullification of Article 370

In another significant statement, Union minister of state for home affairs G Kishan Reddy on Saturday said the government had no intention to keep Jammu and Kashmir leaders in detention..

“We have no intention to keep anyone in jail but in Jammu and Kashmir, some people had to be kept inside to continue the smooth running of the state. All people will be released soon,” Reddy said.

“To give equal rights and development to the people of Jammu and Kashmir, the central government eradicated Article 370. Now the state is leading into a peaceful path,” he said in Hyderabad.

In Srinagar on Saturday, Abdullah, 82, had an emotional reunion with his son Omar Abdullah after a gap of seven months, following his release from detention the previous day, and also met Congress leader Ghulam Nabi Azad, who called for the return of democracy to the erstwhile state.

Accompanied by wife Molly and daughter Safia, the National Conference president visited Hari Niwas in Srinagar to meet Omar Abdullah, who has been under detention since August 5, the day the Centre moved to end Kashmir’s special status and strip it of its statehood. Abdullah and his son greeted each other with an embrace.

Farooq Abdullah, and fellow former CMs Omar Abdullah and Mehbooba Mufti, president of the Peoples Democratic Party (PDP), were all detained the same day along with many other mainstream and separatist politicians to forestall the possibility of them leading protests against the Centre’s move.

The NC patriarch, a member of the Lok Sabha, was released on Friday from detention under the stringent Public Safety Act (PSA), which allows for detention for two years without trial. Omar Abdullah and Mufti remain detained under the PSA, which was invoked against them in February.

She said the family was limiting the number of visitors her father receives because of the coronavirus outbreak and his surgery for cataract earlier in the week.

After meeting his son, Farooq Abdullah straight way drove to his Gupkar residence in the neighbourhood. In the afternoon, leader of the opposition in Rajya Sabha Ghulam Nabi Azad also visited Gupkar for a meeting with the NC president that lasted more than one hour.

Azad told reporters that he had told Abdullah that the people had been anguished over his detention.

“Kashmir witnessed the worst cold this winter in many years and also keeping in view his health, it was wrong on the part of the government ...But nobody can harm a person who is protected by the Almighty,’’ Azad said.

Azad called for the restoration of democracy in Jammu and Kashmir and release of all detained political leaders.

“First and foremost, democracy should be restored in J&K for any political process to start,” Azad said.

“...Democracy can be restored once all the leaders behind bars -- either in jails or in guest houses or under a particular Act -- are released. Let every individual of J&K be released from jail. Let the political process start... Let democracy prevail and then we can pick up other fights,” he said, also seeking restoration of statehood for Jammu and Kashmir.

On Friday, soon after his release, Farooq Abdullah refrained from making any political statement, saying he will speak for the people in Parliament.

“I am grateful to all the people of the state and to all the leaders of the country who spoke for our freedom. I am also grateful to every individual who prayed for us. But this freedom is not complete when Omar Abdullah, Mehbooba Mufti and other leaders are either in prison in the state or outside or under house arrest. I hope the government will take action soon to release everyone if they want the people of the state to enjoy freedom. I am grateful to you,” Abdullah told reporters.