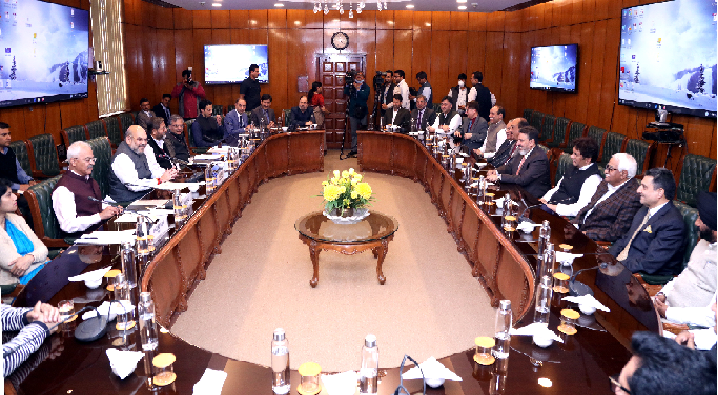 Union Home Minister Amit Shah on Sunday said that the Central government has no intention to bring a demographic change in Jammu and Kashmir, which has also been assured by Prime Minister Narendra Modi in his speech in the Lok Sabha.

"Home Minister (Amit) Shah after engaging with the delegation on about 40 odd issues raised by them emphasised that there is no intention of the government for demographic change in the region and all such talks have no basis at all. He said that the government will work with all sections of the society to realize the hopes of statehood for Jammu and Kashmir at an early opportunity," an official statement said.

The Home Minister was chairing a meeting with a 24-member delegation from Jammu and Kashmir's Apni Party, led by its president Altaf Bukhari at the Ministry of Home Affairs.

During the meeting, Shah assured the delegation that the Modi-led NDA government will take all steps for the overall development of Jammu and Kashmir and expressed confidence that visible changes will be seen on the ground in next three to four months.

He said the Prime Minister, in his address to the nation after the abrogation of Article 370, had said the same thing and even Shah himself in his speech in the Lok Sabha on August 6, 2019, had expressed the same. The Home Minister said this is also good for India's interest, as the region is a border area.

Referring to steps like the release of people from preventive detention, restoration of internet, relaxation in curfew, Shah said all decisions on such relaxations are being taken by the Prime Minister and implemented by the Home Ministry are based on the ground realities and not due to any pressure.