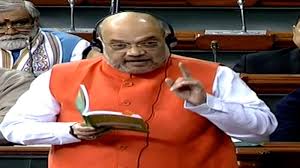 Shah appreciated the participation of all parties and urged them to exercise restraint, and rise above party lines to tackle the situation.

The borders of Delhi with the states of Uttar Pradesh and Haryana have been under surveillance for the last three days and Delhi Police has been taking adequate steps, like checks and other precautionary measures, Shah said.

The Union Home Minister advised that additional forces may be deployed in affected areas, as per requirement. He urged political parties to avoid provocative speeches and statements which could make the situation worse.

He appealed to all to desist from spreading rumours, and said that political parties should cooperate with the Delhi Police to quell these rumours and dispel fear among the public.
There was a need to re-activate local peace committees comprising representatives of all sections of society, religions and eminent local persons. Political parties should ask their local representatives to hold meetings in sensitive areas, Amit Shah said.