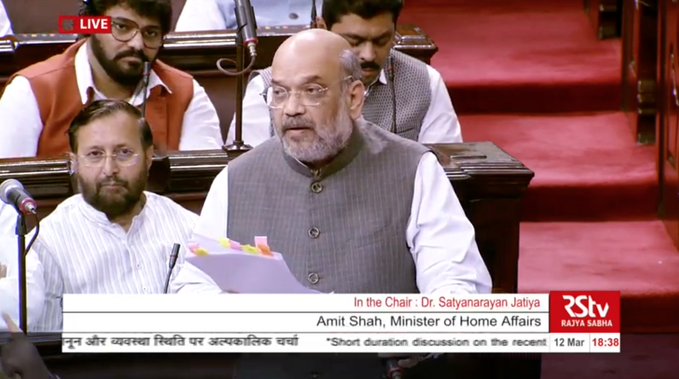 The violence in Delhi that was the outcome of the anti-Citizenship (Amendment) Act protests was part of a “well-planned conspiracy”, Union Home Minister Amit Shah said in Rajya Sabha on Friday.

Planning appears to have been underway for a long time. Security agencies are investigating Hawala (illegal money transfer) transactions that took place after January and three people who financed the riots have been arrested by Delhi Police. Two persons affiliated with ISIS have also been held for stoking communal violence, the Union Home Minister said.

“Several people crossed over from Uttar Pradesh specifically to incite riots, which shows that this was a well-planned conspiracy,” Union Home Minister Shah said. He pointed out that one of the first actions on the part of the police was the sealing of the UP-Delhi border at 10 PM on 24th of February.

Delhi Police and intelligence agencies have come up with a precise sequence of events in the run-up to the violence. Union Home Minister Amit Shah provided the following details in the Rajya Sabha.

A dharna (protest) began in Shaheen Bagh on December 16, two days after a rally by political parties opposing the Citizenship Amendment Act (CAA). A WhatsApp group United Against Hate was created on February 17. Some leaders gave an inflammatory speech on February 19. This led to protests by 8-9 groups in the area and culminated into riots, Shah said. The Union Home Minister said that some vested interests had incited and misled the minorities and indulged in fear mongering that CAA would take away their citizenship which is not true.

The riots spread fast because of the high population density of the affected areas, which has a mixed population. The narrow lanes prevented effective timely intervention by police vehicles and rescue by ambulances.

More than 80 companies of paramilitary forces were still deployed in the affected areas, with specialised strike forces created to quickly control the riots if such a situation arises again, Shah pointed out.