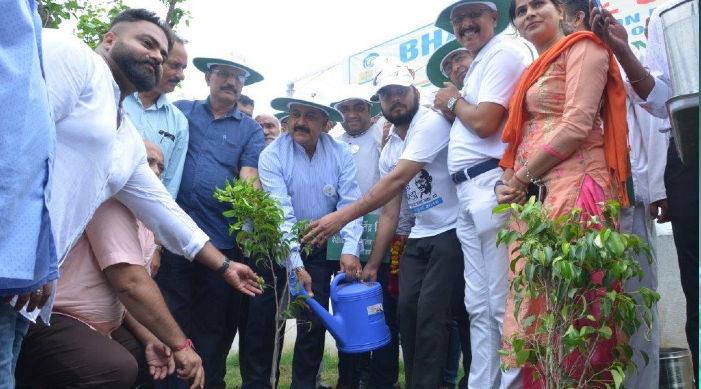 The Green Srinagar Initiative under Smart City mission under which purposeful plantation is undertaken annually in Srinagar district was launched Monday.

Divisional Commissioner Kashmir Baseer Ahmad Khan launched the drive by planting saplings in the peripheries of Tulip garden at Cheshmashahi. He along with Deputy Commissioner Srinagar Dr Shahid Iqbal Choudhary later flagged off fleet dedicated vehicles as part of the launch from DC Office Srinagar here.

Under the greening initiative which was first launched last year the district administration in association with the Srinagar Smart City Limited or SSCL undertakes to planting some 2 lakh saplings across the district during the two week-long drive which will continue up to March 31. The aim is to reduce carbon-footprint and reverse ill-effects of climate change.

The launch follows month-long registration for availing of saplings during which requests from institutions and households from across the district were made for over 50 thousand saplings of different varieties of plants.

The fleet of vehicles flagged off on the occasion will undertake distribution of saplings among identified locations to be developed as green spaces and those institutions and individuals households which have raised requests for them.

This year’s drive will also include plantation in schools identified from across the district. Green Clubs of students created last year in each of these schools will again volunteer in plantation exercise in their schools and catchment areas. Their involvement is aimed at eliciting greater community participation in the greening initiative.

The drive will also include plantation in institutions and on roads among other public spaces. Like last year several banks and institutions have associated their organisations with the initiative.

To ensure achievement of desired results the concerned Tehsildars will monitor plantation and post-plantation maintenance in their areas of jurisdictions.

The DC while speaking on the occasion said the fleet of dedicated vehicles flagged off will reach out to all households and institutions having registered for plantation this year. He said a number of roads have also been finalised for strip plantation under the drive.

Dr Shahid said that some 2 lakh saplings have been made available by the Forest department for plantation across the district as part of the greening initiative. He said various NGOs and environmental organisations have been roped in to ensure success execution of the initiative.