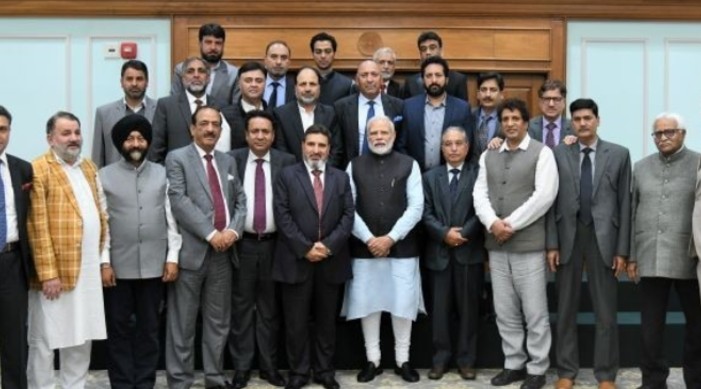 In an interactive session, Prime Minister Modi called for ‘Janbhagidari’ in transforming Jammu and Kashmir and emphasized on the importance of an administration that gives voice to the people. Prime Minister also noted that the democracy in the region could be strengthened through a fast moving process of political integration.

Prime Minister assured the delegation that the government is committed to economic development of the region through extensive focus on infrastructure development and creating new investment opportunities in sectors like tourism. He assured full support by the government to resolve all the issues being faced by Jammu and Kashmir.

Prime Minister engaged with the delegation on various issues like concerns on demographic changes, delimitation exercise and grant of state domicile. Referring to his statement in Parliament, he underlined that his government will work with all sections of the population to realize the hopes of state hood for Jammu and Kashmir at an early opportunity.

Apni Party chief Altaf Bukhari noted that August 5, 2019, when the decision to abrogate Article 370 and Article 35-A was taken, was a watershed moment in the history of Jammu and Kashmir.

The delegation thanked the Prime Minister for his unstinted support and untiring efforts towards the development of Jammu & Kashmir. They also appreciated the efforts of the government, security agencies and the people of Jammu and Kashmir towards maintaining peace and security in the region.