Ministry of Law and Justice | 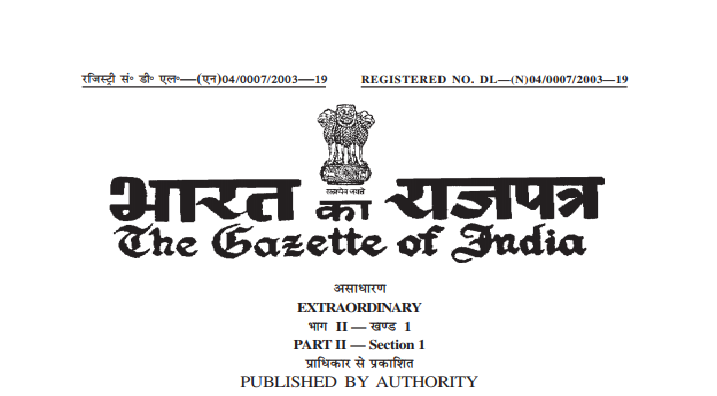 The Citizenship (Amendment) Act, 2019 is applicable to members of the Hindu, Sikh, Buddhist, Jain, Parsi or Christian community from Afghanistan, Bangladesh or Pakistan

1. (1) This Act may be called the Citizenship (Amendment) Act, 2019. (2) It shall come into force on such date as the Central Government may, by notification in the Official Gazette, appoint

2. In the Citizenship Act, 1955 (hereinafter referred to as the principal Act), in section 2, in sub-section (1), in clause (b), the following proviso shall be inserted, namely:— "Provided that any person belonging to Hindu, Sikh, Buddhist, Jain, Parsi or Christian community from Afghanistan, Bangladesh or Pakistan, who entered into India on or before the 31st day of December, 2014 and who has been exempted by the Central Government by or under clause (c) of sub-section (2) of section 3 of the Passport (Entry into India) Act, 1920 or from the application of the provisions of the Foreigners Act, 1946 or any rule or order made thereunder, shall not be treated as illegal migrant for the purposes of this Act;".

3. After section 6A of the principal Act, the following section shall be inserted, namely:— '6B. (1) The Central Government or an authority specified by it in this behalf may, subject to such conditions, restrictions and manner as may be prescribed, on an application made in this behalf, grant a certificate of registration or certificate of naturalisation to a person referred to in the proviso to clause (b) of sub-section (1) of section 2. (2) Subject to fulfilment of the conditions specified in section 5 or the qualifications for naturalisation under the provisions of the Third Schedule, a person granted the certificate of registration or certificate of naturalisation under sub-section (1) shall be deemed to be a citizen of India from the date of his entry into India. (3) On and from the date of commencement of the Citizenship (Amendment) Act, 2019, any proceeding pending against a person under this section in respect of illegal migration or citizenship shall stand abated on conferment of citizenship to him: Provided that such person shall not be disqualified for making application for citizenship under this section on the ground that the proceeding is pending against him and the Central Government or authority specified by it in this behalf shall not reject his application on that ground if he is otherwise found qualified for grant of citizenship under this section: Provided further that the person who makes the application for citizenship under this section shall not be deprived of his rights and privileges to which he was entitled on the date of receipt of his application on the ground of making such application. (4) Nothing in this section shall apply to tribal area of Assam, Meghalaya, Mizoram or Tripura as included in the Sixth Schedule to the Constitution and the area covered under "The Inner Line" notified under the Bengal Eastern Frontier Regulation, 1873.'.

4. In section 7D of the principal Act,— (i) after clause (d), the following clause shall be inserted, namely:— "(da) the Overseas Citizen of India Cardholder has violated any of the provisions of this Act or provisions of any other law for time being in force as may be specified by the Central Government in the notification published in the Official Gazette; or"; (ii) after clause (f), the following proviso shall be inserted, namely:— "Provided that no order under this section shall be passed unless the Overseas Citizen of India Cardholder has been given a reasonable opportunity of being heard.".

5. In section 18 of the principal Act, in sub-section (2), after clause (ee), the following clause shall be inserted, namely:— "(eei) the conditions, restrictions and manner for granting certificate of registration or certificate of naturalisation under sub-section (1) of section 6B;".

6. In the Third Schedule to the principal Act, in clause (d), the following proviso shall be inserted, namely:— 'Provided that for the person belonging to Hindu, Sikh, Buddhist, Jain, Parsi or Christian community in Afghanistan, Bangladesh or Pakistan, the aggregate period of residence or service of Government in India as required under this clause shall be read as "not less than five years" in place of "not less than eleven years".'.