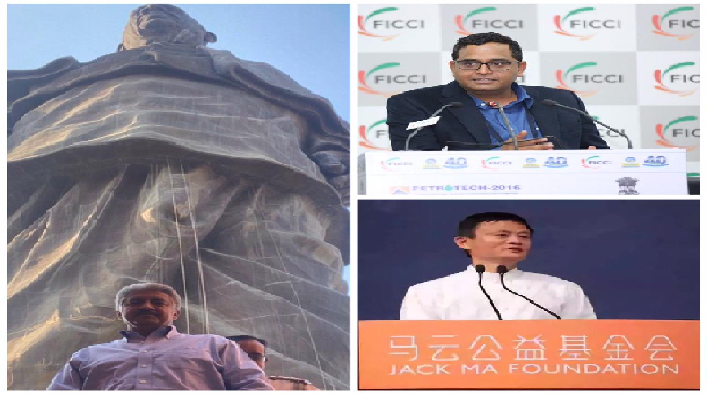 Chinese billionaire Jack Ma (centre, in pic) showed his benevolent side as he pitched in to help the world fight the novel coronavirus. The founder of e-commerce major, Alibaba, Ma became the most talked about business figure after he said that he would marshall all available resources at his disposal to take on Covid-19.

From donating emergency supplies (1.8M masks, 210K test kits, 36K protective suits, plus ventilators & thermometers) to Afghanistan, Bangladesh, Cambodia, Nepal, Pakistan & Sri Lanka in Asia to donating 20,000 test kits, 100,000 masks and 1,000 medical use protective suits in each of the 54 African countries, the 55-year-old proved that he was a good Samaritan whose charity was not mapped by geographical boundaries.And even as the business magnate didn’t have India in his list of beneficiaries, there was much talk in the country about his act of generosity. And what followed were natural questions: who among India’s rich was doing a Jack Ma?And it’s not just one individual, but a bunch of lion-hearted boardroom tycoons who have taken the pledge to help fight the virus that has thrown life off-track, in India and across the world.

On Sunday, as the country observed ‘Janata Curfew’ as a mark of appreciation for the selfless help provided by the caregivers, Anand Mahindra (in pic) shared some heartening news with his 7.5 mn followers on Twitter.

The Mahindra Group chairman offered to convert Mahindra Holiday resorts as temporary care facilities. He also tweeted that the group will ‘immediately begin work on how our manufacturing facilities can make ventilators’.

And that’s not all. He also pledged that the Mahindra Foundation will create a fund to assist SMEs and SMBs, ‘the hardest hit in our value chain’. The business tycoon himself pledged to contribute 100% of his salary to the fund, and keep adding to it over the course of the next few months.

The Executive Chairman of Vedanta Resources Limited showed his generous side as he pledged Rs 100 cr to fight the pandemic. The 66-year-old Anil Agarwal, who tweeted a picture of his participation in the ‘Janata Curfew’, wrote on the micro-blogging platform that he was ‘committing 100 cr towards fighting the Pandemic’.
Expressing concern for the daily wage earners, he wrote that ‘we will do our bit to help’.

Rising To The Occasion

Vijay Shekhar Sharma (in pic) has been vocal over the past few weeks about the coronavirus outbreak and what startups can do to survive “these testing times”.

On Friday, the Paytm founder announced that he would be foregoing his salary for the next two months to help the Paytm office staff who may need it. And Sharma seemed to have drawn his inspiration from Marriott International President and CEO Arne Sorenson who had announced last week that in light of the financial impact of Covid-19 on Marriott and the hotel industry, he would be giving up his salary for the rest of 2020.

In an emotional video posted on Twitter, he had also said that the Marriot top executive team would be taking a 50% pay cut to help the company steer through the challenging times.

The Tata group is known for its generosity and philanthropy, and going the extra mile in adverse conditions. Just weeks after the Covid-19 outbreak escalated, the manufacturing and auto behemoth has reassured all group companies that it will ensure full payments to their temporary workers and daily wage earners, for March and April, working across their offices and production sites in India.

They would be paid even if they fail to report for work due to precautionary measures. Last week, Tata Sons Chairman, N Chandrasekaran , while acknowledging that the pandemic would have ‘a large and deep financial impact on the weaker socio- economic segments of society,’ reassured that all dues to MSMEs would be cleared.

Xiaomi India MD Manu Kumar Jain on Monday pledged his support to the ongoing battle against the Covid-19 outbreak. The 39-year-old Xiaomi India top boss, in a tweet, reiterated that ‘it's our duty to support doctors, paramedics & hospital staff!’, and urged other brands to follow suit.

Posting an official statement, Jain also said that the Chinese handset major is donating N95 masks to state governments in Karnataka, Punjab, Delhi, government hospitals, and state police starting this week. Apart from masks, it will also be donating hazmat suits to doctors across a few government hospitals like AIIMS.