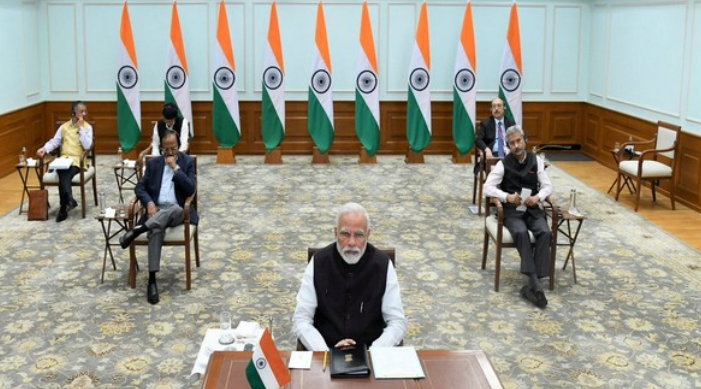 Prime Minister Narendra Modi on Thursday urged the G-20 group of developed and developing countries to rework its definition of globalization which would focus on the collective interests of all people rather than balance the competing individual interests of a few.

In his intervention at the “Extraordinary Virtual G20 Leaders’ Summit" convened by Saudi Arabia to discuss the impact of the Coronavirus pandemic on the global economy, Modi also highlighted the need for reforming and empowering international organizations like the World Health Organisation to deal with pandemics like the Covid-19 so that it was effective in assisting countries and developing prescribing health protocols.

According to people familiar with the development Modi in his speech pointed out that the G-20 “after mitigating the global financial crisis of 2008 was an organization that dealt with a purely economic agenda to define globalization."

“But in many senses globalization had failed us… it (G-20) had become a forum to balance competing individual interests rather than looking at the collective interests of all human kind, whether it was combating terrorism or fighting climate change, the human aspects of our globalization had been subsumed by economic and financial focus," one of the people cited above quoted Modi as saying.

Modi’s comments are in line with his recent speeches that call for “reformed multilateralism" – ie not maintaining status quo but making the systems more effective to meet present day challenges as well as making them more inclusive.

In his intervention, the prime minister also pointed out that it had taken the G-20 three months into the crisis to come together to look for solutions on how to deal with the crisis. The Coronavirus first emerged in China’s Hubei province in December but now has spread to 175 countries and regions, infecting almost 500,000 people and killing more than 22,000 people.

The recommendations made by Modi included “putting the human being rather than economic targets at the centre of our visions of global prosperity and cooperation," the free and open sharing of medical development and research for all, and strengthening and reforming organizations like the WHO “which continue to be based on the last century’s model," the person said pointing to a sense among G-20 countries that the WHO was “not as effective as it could have been."

Modi’s comments come against the backdrop of WHO Director-General Tedros Adhanom Ghebreyesus being criticized for delaying declaring Covid-19 “a public health emergency of international concern" and failing to intervene more decisively to deal with the crisis in China.

The “Extraordinary Virtual G20 Leaders’ Summit" convened by Saudi Arabia, which currently holds the rotating presidency of G20 comes as the Covid-19 has roiled global stock markets and caused major disruption across sectors. Countries have closed borders, businesses downed shutters and airlines have stopped operations in a bid to combat the spread of infections that have overwhelmed countries like Italy. Prices of oil have crashed. Many countries have announced special economic packages to support small industries as well as vulnerable sections of their population to contain the economic impact of the pandemic with no predictions as to when the crisis will bottom out. After China, it is countries in Europe like Spain and Italy that have been the hardest hit in terms of infections and death tolls.

According to the person cited above, G-20 members, the US and China, that have been sniping at each other over the origins of the Coronavirus outbreak, did not resort to any blame game. Rather the emphasis of the summit was on cooperation, on how to address the common challenges posed by the pandemic, the person said.

“I did not see any reference at all to the origins of the crisis as to who was responsible. I think all the efforts were on what can we do mitigate hardships caused by this challenge" and build up preparedness to meet similar situations in the future, the person said. There was “no effort to ascribe blame or responsibility," the person said describing the summit as the “best illustration of global cooperation."

There was an effort to look at setting aside funds from among countries as well as private individuals and groups in order to help poorer and less developed countries meet the challenge posed by Covid-19, the person said.

Modi in his speech also took up the case of countries that could not make their own case at the G-20 forum given that they were not represented, the person cited above said.

A statement from the Indian foreign ministry said that at Thursday’s meeting, G20 Leaders “committed to use all available policy tools to minimize the economic and social cost of the pandemic and to restore global growth, market stability and strengthening resilience."

“G20 countries committed to inject over $ 5 trillion into the global economy to counter the social and economic impact of COVID-19. Leaders also agreed to contribute to the WHO led COVID-19 Solidarity Response Fund on a voluntary basis," it added.