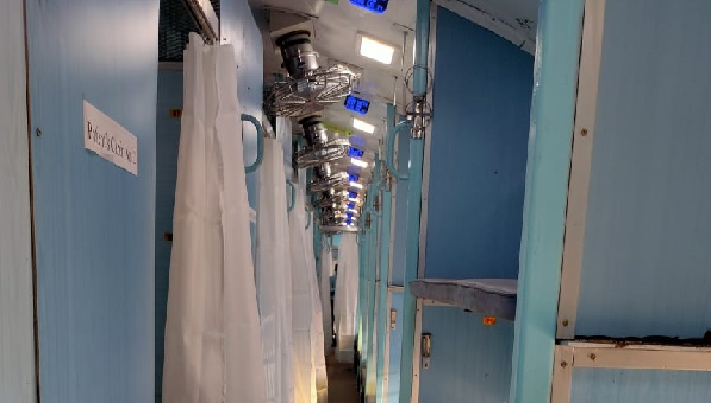 The Indian Railways has come up with a prototype of a coach that can function as isolation wards for Covid-19 patients.

Each of these non-AC coaches can house up to 10 patients, maintaining sufficient space between each. Non-AC coaches have been chosen to restrict the movement of the virus which would otherwise have spread through the AC ducts.

The coach has been earmarked into cabins for patients, doctors and nurses. Photographs posted on Twitter by Union Minister for Railways Piyush Goyal showed plastic curtains that appear to be similar to those used in hospitals.

The middle berth on one side in each cabin has been removed so that the patient can be kept comfortably on the lower berth.

Now, Railways will offer clean, sanitised & hygienic surroundings for the patients to comfortably recover, he added.


These photographs were also shared by the United Nations in India on Twitter.

In the first phase, the 16 workshops of the Indian Railways will be making two rakes each. Each rake will have 10 coaches. So to begin with, there will be 32 such rakes of 10 coaches each in the next two weeks, The Indian Express reported. Two of the four toilets have been converted into bathrooms, the report said.

The Indian Railways, which has suspended all passenger services till April 14, came up with the idea after Prime Minister Narendra Modi’s call to look for innovative ways to boost healthcare facilities across the country to tackle a rise in Covid-19 cases.