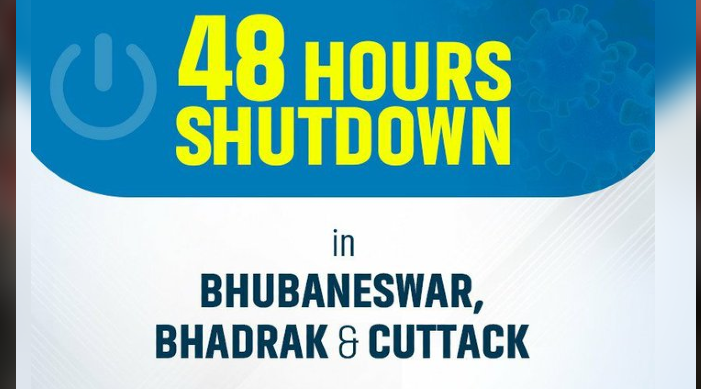 Giving notice period of roughly seven hours, the Odisha government on Friday announced a complete 48-hour-long “shutdown” of Bhubaneswar, Bhadrak and Cuttack towns apprehending community transmission of coronavirus in the state after a positive case was found to have no relevant travel history outside the state or country.

Starting Friday 20.00 hours, these three urban pockets of the state will experience for 48 hours more restrictions on movement of essential services personnel, commodities and services, than presently imposed by the Ministry of Home Affairs.

In a departure from its own guidelines on not publicly revealing identities of COVID patients, the Odisha government on Thursday had announced the identity of the state’s fifth case.

Citing that this case had no travel history outside the state, the state government published the name and complete address of the patient and advised people who have come in contact with the patient to remain in home quarantine for the following 14 days.

In a press conference Friday, Odisha Chief Secretary Asit Tripathy said on Bhubaneswar and Bhadrak, “We have reason to suspect community transmission. Our surveillance has to be taken one step forward”.

He added, “This shutdown period will be used by administrative agencies for tracking and testing and we request complete cooperation by the residents in these areas”. He added that the Special Relief Commissioner in Odisha has withdrawn orders of the Home Ministry and taken out a new order that “violators of the shutdown will be taken by police and other enforcement agencies and put into government quarantine facilities for 14 days… action will be taken under the penal provisions under the Disaster Management Act”.

Odisha DGP Abhay also addressed the press conference saying that the shutdown is “almost a curfew”.

“In the current lock down system grocery shops and essential commodities shops were open. In this system, for 48 hours all shops (like fruits and vegetables, meat, fish, dairy) will remain closed. Medical services that were completely open will also operate under restrictions”.

Explaining these new restrictions, he said, “Number of medicine shops that will be opened will be reduced in numbers as per determination of local authorities. For example, in Bhadrak town the district’s collector will make this determination”.

Advising people not to go to hospitals for manageable conditions, the DGP added that the state government is increasing the number of ambulances in these two areas for actual medical emergencies.

“There is no need to panic. I don’t want to see thousands of people on Bhubaneswar’s streets trying to buy things”, the DGP said. “We had issued a number of passes for essential services. All passes given in Bhubaneswar and Bhadrak will remain suspended for these 48 hours. New passes may be issued for doctors, but the number of essential services has been reduced”.

He also added National Highways that pass through Bhubaneswar and Bhadrak do not come under these restrictions “as long as you do not stop (the vehicle in these two areas)”. He said this exemption is to ensure free movement of goods trucks carrying essential commodities.

An hour after the press conference, the office of the Chief Secretary Odisha tweeted: In view of the fact that one resident of Cuttack has been found positive for Covid -19 Cuttack City is being included under Shut down for 48 hours.