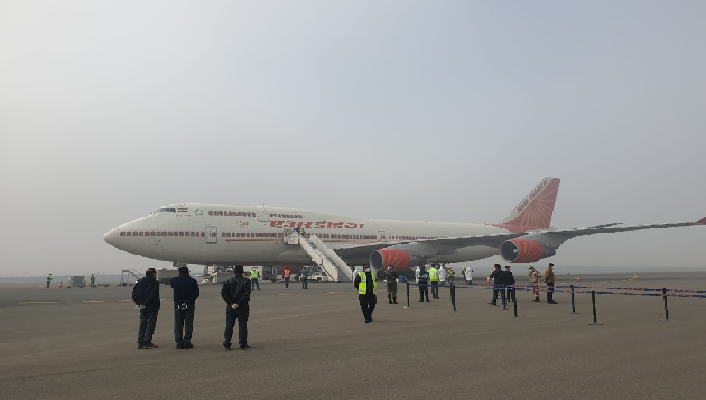 National carrier Air India, which has operated numerous relief and evacuation flights worldwide amid the novel coronavirus pandemic, has received messages of praise from several countries. The latest nation to join that list is the one least expected - Pakistan.

The Air Traffic Control in the country not only welcomed Air India flights into its airspace but also appreciated the work the airline is doing in these uncertain times.

On April 2 Air India operated two flights from Mumbai to Frankfurt in Germany; these flights carried relief materials and European nationals stranded in India after the "total lockdown" announced by Prime Minister Narendra Modi on March 24.

"The flight took off from Mumbai at 1430 hours. We entered Pakistan airspace at 1700 hours. We tried to contact Air Traffic Control but did not get a response. So we changed frequencies and (then) managed to contact ATC," a senior Air India officer said.

"As-salamu alaykum (Peace be upon you). This is Karachi Control welcoming Air India for relief flights," the Air India officer told NDTV, quoting the ATC.

"Confirm you are operating relief flights for Frankfurt," the ATC then asked, to which the Air India pilot replied: "Affirm".

"Thank you so much," the captain of the flight responded.

A short while later, when the Air India planes were entering Iran airspace but were unable to contact the authorities, Pakistan helped again.

"Here also Pakistan helped us and got in touch with Iran and gave our message to them. Normally in such flights we spend maximum number of hours in Iran airspace but Iran also gave us a shorter route," the Air India official told NDTV.

"The flight was scheduled to reach Frankfurt at 0915 hours but it landed at 0835 hours," Air India said.

The national carrier is scheduled to operate 18 charter flights to repatriate German, French, Irish and Canadian nationals stuck in India, as requested by their respective embassies.

All flights, including ones bringing critical medical equipment from China, are being operated in adherence to safety protocols laid down by the Director General of Civil Aviation (DGCA).

Air India is also scheduled to operate cargo flights between Delhi and Shanghai to bring in critical medical equipment for India; these flights will run till April 9.

The novel coronavirus pandemic has infected over a million people worldwide and led to nearly 50,000 deaths. In India the number of cases has crossed 3,000, with 75 deaths linked to the virus, the Health Ministry said on Saturday.