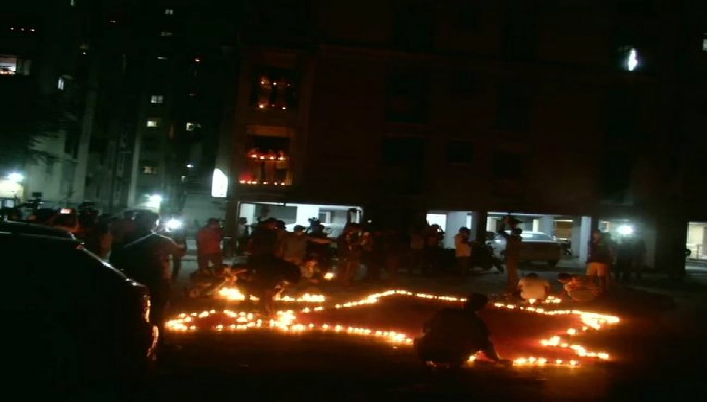 Millions of people across the country switched off the lights of their houses in a show of solidarity in fight against the coronavirus pandemic.

Lamps were lit, torches were switched on and mobile lights were flashed from the balconies by countrymen who answered the call given by Prime Minister Narendra Modi.

The Prime Minister, in a video message on Friday, had asked people to use the lights of lamps or candles to “challenge the darkness of coronavirus”. The act, he said, will send a powerful message to the world that has been widely affected by the deadly SARS-CoV-2 virus.

Many users posted the pictures of themselves taking part in the ‘9pm-9min’ initiative. They were seen following the norms of social distancing too while doing so.

Covid-19, the disease caused by coronavirus, has affected more than 3000 people across the country and left close to 100 dead. India is under a 21-day lockdown announced by PM Modi in his address to the nation on March 24.

The lockdown, which has impacted the economy, is important to break the cycle of infection, the Prime Minister has said in his address. He also apologised to the people for the trouble, but said he knows they will forgive him because this is the right thing to do.

The virus which started from China in December last year, spread rapidly across the world and in just 93 days, infected more than a million people. Over 200 countries are under its grip; United States is the worst hit now where the virus has spread in the community and President Donald Trump has said the recovery will take weeks and weeks.

In India, the government has so far maintained that there is no community spread and has launched an aggressive containment strategy to check the spread of the disease.