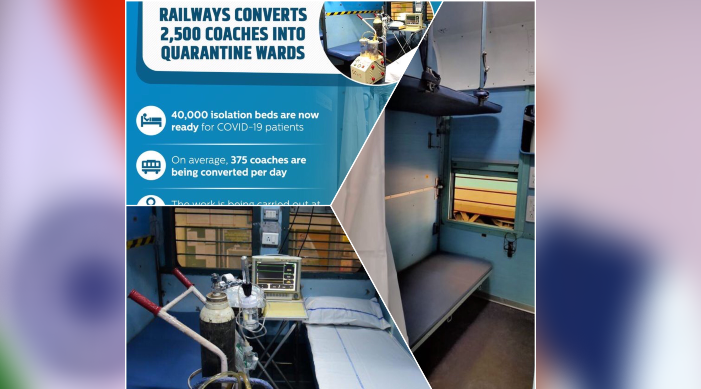 Although India's hospital system isn't overwhelmed yet, the repurposed trains could ease some of the pressure if the number of coronavirus patients begin to rise

When Prime Minister Narendra Modi imposed a nationwide lockdown on March 25, Indian Railways took the unprecedented move of suspending passenger trains across the country until April 14.

It was the first time in 167 years that Asia's oldest rail network had been suspended.

Now the railway network has decided to convert as many as 20,000 old train carriages into isolation wards for patients as the virus spreads.

The network, which is the world's fourth-largest rail operator and India's biggest employer, already operates 125 hospitals across the nation, so has the expertise to expand into mobile beds.

On April 1, India had recorded 4,288 cases of Covid-19, including 117 deaths, according to Johns Hopkins University -- a relatively small number for a nation of 1.3 billion. While India's hospital system isn't overwhelmed yet, the repurposed trains could ease some of the pressure if the number of coronavirus patients begin to rise.

"Now, the railways will offer clean, sanitized and hygienic surroundings for the patients to comfortably recover," Piyush Goyal, the Railways Minister said in a tweet.

Normally, Indian Railways runs more than 20,000 passenger trains a day, on long-distance and suburban routes, from 7,349 stations across India.

The lockdown has put nearly 67,368 kilometers of track out of use -- enough to circle the equator 1.5 times -- and left thousands of passenger trains sitting idle. Freight trains, or goods trains as they are called in India, remain operational.

Railway bosses have instructed each of India's 16 railway zones to identify non-air conditioned carriages that are no longer in operation on passenger routes to turn into hospitals, and have them ready for use in case of an emergency.

The first 5,000 isolation wards will be ready within a fortnight, and if necessary, more carriages can be converted within 48 hours, said Rajesh Dutt Bajpai, executive director of information and publicity at the Railway Board.

Each sanitized carriage will be able to accommodate up to 16 patients, alongside a nurses' station, a doctor's cabin, and space for medical supplies and equipment.

The trains, once ready, will be sent to any location that might be facing a hospital bed crunch due to a potential spike in positive cases.

The Indian government has also instructed railway factories to assess the feasibility of manufacturing hospital beds, stretchers, medical trolleys, masks, sanitizers, aprons, and medical apparatus such as ventilators for use in railway hospitals and other government hospitals.

The hospital train is equipped to treat a variety of ailments, from cataracts, cleft lips, hearing problems, and epilepsy, to mobility issues, plastic surgeries, dental surgeries, cancer screening and more.

The Lifeline Express is equipped with an operation theater, treatment rooms, recovery wards, a pantry car, and accommodation for medical staff.

The new coronavirus trains are not designed to function as full-service hospitals, but local health officials will have the option of using them for Covid-19 positive patients who are not critically ill.