How the J&K govt is combating Coronavirus 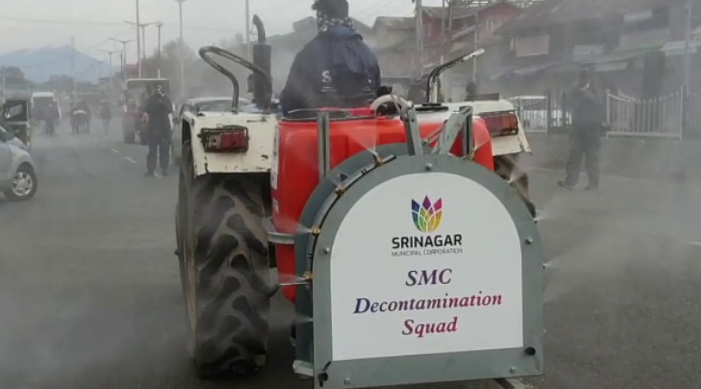 A vehicle disinfects roads in Srinagar

Covid-19 has tightened its grip on the world, over a million are affected and thousands have died and the number keeps increasing with every passing day. The world and the developed countries like America, France, Italy and many others are struggling to cope up with the crisis. So far, little is being achieved in curbing the spread of what the West calls the Wuhan virus. Consensus has been built that prevention is the only cure. In India, we are under lockdown till April 14 after Prime Minister Narendra Modi announced it on March 22 to break the chain of this deadly virus.

After the southern state Kerala, the virus was most damaging in the Union Territory of Jammu and Kashmir. The UT has the highest per million Covid-19 cases in India. It reported its first death by Covid-19 on March 26. Mohammad Ashraf Anum, a 65 year old religious preacher from Tableegi Jamaat, died at a Srinagar hospital. Another 50 year old man from Tangmarg town of North Kashmir also died of Covid-19.

Before the two deaths by the virus were reported, the Jammu and Kashmir administration was already on high alert. It had begun the screening of people arriving from abroad at Srinagar airport. But the real panic occurred when a 65 year old woman from downtown Srinagar tested positive for Covid 19. The first Covid-19 case in J&K, the woman had recently returned from a religious pilgrimage in Saudi Arabia and reached home without facing the screening test at the airport after using the VIP protocol. This detection of the first case was a cue for the local administration to intensify its surveillance and contact tracing before it spread at the community level.

The entire Khanyar area was cordoned off and subsequently, a lockdown was ordered across the city. Over 100 doctors were dispatched to the area for the screening of common people. Fumigation was also conducted and all the contacts traced were put under a quarantine. In the meanwhile, chaos broke out in the entire Kashmir after hundreds of people returned from different parts of the world. While the administration managed to screen the people at the airport and put them in quarantine, some managed to hide their travel history, showing fake identity proof and stayed with their families.

Following the death of a religious preacher who had arrived from Delhi after attending a religious gathering and later traveled to other parts of Jammu and Kashmir, the UT administration expanded its drive of contact tracing and placed his entire family under quarantine. Fortunately, all his other family members tested negative. With exhaustive efforts, the administration prepared a list of over 800 people from Tablighi Jamaat in order to stop the spread of Covid-19 at the community level.

The local administration mobilized mass contacts and took people on board to locate all those who were hiding their travel history. The officials attributed the highest level of detections of Covid-19 cases to the aggressive testing of suspects.

According to government spokesperson Rohit Kansal, J&K had the highest level of tests of suspected cases in the entire country. However, it was few days ago surpassed by Kerala after resurfacing of Covid-19 patients in the state. As I write this, the surveillance testing in the Union Territory is still at second number in the country.

Meanwhile, as many as 30,000 beds have been facilitated for quarantine purposes in the UT and 11 dedicated Covid-19 hospitals were set up in the shortest possible time. As of now, nearly 18,000 people are placed in quarantine with many hundreds being discharged after completing their quarantine period of 14 days.

As per government orders, the authorities have imposed the strictest lockdown. A coordinated effort is being made by one and all departments to combat the deadly virus. To overcome any laxity at the hands of executive agencies, there was a stern warning sent across the administration. Last week, the services of a doctor at Rainawari hospital were terminated and her colleague, the daughter of a senior political leader, was suspended for not reporting on duty. The Divisional Commissioner sought a report for ‘exemplary’ action against the negligent doctors at another hospital after their alleged failure in the first two attempts to detect the religious preacher infected with Covid-19. In Uri town of Baramulla, a Naib Tehsildar was served a suspension order by the concerned Deputy Commissioner for dereliction of duty regarding Covid-19. The administration has adopted a multi-pronged strategy and ensured a fair division of work to all the concerned agencies.

Aware that a lockdown would result in suffering for the common people, the administration has ordered the release of Rs 50 crores to meet the essential and medical requirements. It has also announced the release of two installments of old age and disability and family pension to all the 7.7 lakh pensioners and additional coverage of 1.7 lakh pending cases. Besides, Rs 1,000 to each construction worker was also released under Pradhan Mantri Gareeb Kalyan package.

Insisting that people follow the protocol of social distancing, the authorities ordered the door-to-door delivery of essentials and made public the helpline numbers. Under this initiative, not only were those holding ration cards covered, the authorities also made essentials available to non-locals who got trapped in this situation and were in Kashmir either for jobs or education.

After ensuring the delivery of essential services and putting the medical emergency operations in place, the authorities have imposed the strictest lockdown restricting the movement of people.

It also maintained synergy with the local social organizations and ensured volunteers and NGOs do not face any hardships in delivering social services. Unlike in the past, the services designated mandatory including public delivery, health and media had no complaints of harassment by the security forces deployed on the ground.

The fleet of 116 ambulances launched by Lieutenant Governor GC Murmu on March 24 also does a commendable job in the two Union Territories of Jammu and Kashmir and Ladakh. As per the official data, as many as 1,000 patients have been ferried by the fleet to the hospitals in various districts amidst the lockdown; the ambulances have also facilitated several successful deliveries while transporting women who were expecting.

“In both the Union territories, we are working in close coordination with the local administration. We even get calls for suspected Covid-19 patients and we take no time in ferrying them to the health facilities,” says Vikrant Gusian, head of operations for the service.

The ongoing effort of combating the invisible enemy by the administration seems to be proving quite efficient unlike in the past and especially during the devastating floods of 2014. During the floods of 2014 September, when Omar Abdullah was leading a coalition with Congress, the state administration witnessed a major breakdown. In fact, one of the bureaucrats to vent his frustration anonymously wrote a hard-hitting article in a local daily expressing his disappointment at the government’s failure in tackling the situation. Kashmir survived those massive floods only after locals volunteered and distributed the aid and relief among people besides hundreds of NGOs delivering aid to the people from various parts of the country.

The ongoing war against Coronavirus has the same bureaucracy that was on ground during the times of floods. But today, it is not influenced by any political powers. The right people are at the right place. Media is being coordinated professionally and all the information required is being provided properly by an Indian Administrative Service (IAS) rank officer. Owing to this high level coordination of media, the journalists on ground in such tough times do not face any hardships in acquiring official data and information for its wider publication. All the traditional and modern tools are being utilized in timely dissemination of information to the media outlets. This has put a stop to rumor mongering which would otherwise be the norm.

One of the initiatives launched a year back, of removing the officers posted on critical positions on the basis of their political affiliations, has been of great help to the administration in delivering efficient services. During the last one year, there has been a massive reshuffle in the Jammu and Kashmir administration and this is showing results now.

As there is no medicine available to cure coronavirus, it is only the will and dedication of the administration that is defeating it on ground in Jammu and Kashmir.