As Kashmir struggles with Covid-19, Pak preps to send across more terrorists 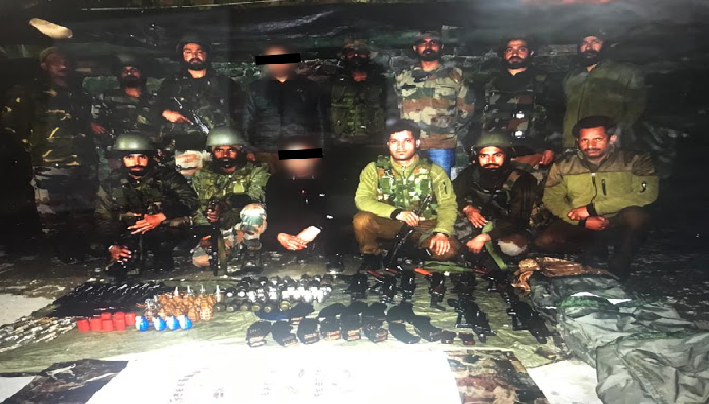 File photo of a cache of arms seized near the Line of Control. (Source: Twitter @ChinarcorpsIA)

Security forces say there are about 240 terrorists in Jammu and Kashmir. 104 of them are foreign terrorists

At a time when the global eyes are focused on the fight against coronavirus pandemic, Pakistan-based terror groups - Lashkar-e-Tayyiba and Jaish-e-Mohammed — have started assembling at launch pads across the Line of Control (LoC) in Jammu and Kashmir to beef up terrorist strength and prepare for engagement with security forces this summer.

One of the first terror teams that came from across the border has been neutralised by soldiers in Kupwara. J&K Director General of Police Dilbagh Singh told Hindustan Times.

The Jammu and Kashmir police chief said the Muridke-based group has also readied terrorist groups for infiltration into Uri, Karna, Keran and Kala Roos sector in north Kashmir. The situation south of Pir Panjal has also been hot with infiltration alerts at Mendhar, Balakot, Savjian, Nowshera, Samba and Hiranagar sectors.

The renewed attempts at infiltration are an attempt to boost the terrorist strength in Kashmir where 50 terrorists have been neutralised in the last three months.

According to an estimate by the security establishment, there are, however, no less than 242 active terrorists in the Valley. About 100 of them are foreign terrorists belonging to the Lashkar and Jaish-e-Mohammed.

According to inputs, while Lashkar is trying to use the north Kashmir route to infiltrate, the JeM groups are trying to infiltrate in the Jammu sector.

“Already there are visuals of food and shoes being stockpiled at launch pads at Tattapani across the Kupwara sector indicating infiltration activity will pick up in the coming days when the snow melts at high mountain passes,” said a senior security official.

According to counter-terror operatives, even though the local youth sentiment may be inclined towards extremism, terror groups had not been able to recruit them due to shortage of weapons and communication clampdown.

Kashmir was placed under a communication lockdown just before parliament ended the erstwhile state’s special status in early August. The internet ban, which was imposed during this period, was relaxed when the government allowed people access to 2G mobile networks. There have, since then, been demands to restore 4G network.

Security agencies have, however, asked the government to continue with the restricted internet connectivity. Officials insist that the terrorists were shifting to platforms such as the Wire, Telegram and Conion to communicate, which would be difficult to track. Since these Voice Over Internet Protocol (VOIP) platforms would require 4G networks, security officials are telling the government to continue the restrictions for some more time.

Even though the recent release of National Conference father-son duo has been seen favourably by the public in the Valley, it is testing time for the new Altaf Bukhari Apni party as Pakistan based groups will mount heat this summer.