Available for you 24x7, Centre and states must work together: PM to chief ministers 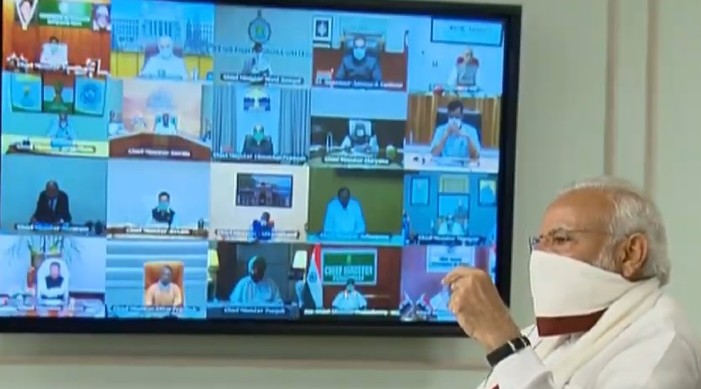 The chief ministers of Maharashtra, Punjab and Delhi suggested that the nationwide lockdown be extended till April 30

Prime Minister Narendra Modi on Saturday conducted a video conference with chief ministers of all major states and union territories in a bid to take stock of the situation on the ground and record suggestions regarding the nationwide lockdown slated to end on April 14. The lockdown was announced by the prime minister in an effort to curb further spread of the novel coronavirus which has claimed more than 235 lives in India to date.

The video conference began at 11 am with PM Narendra Modi wearing a homemade mask, the very same recommended by the Ministry of Health and Family Welfare. "I am in contact with all of you. If there is anything important, we can talk on the phone. I am available for you 24x7," were the prime minister's opening remarks.

During the video conference, the chief ministers of Maharashtra, Punjab and Delhi suggested that the nationwide lockdown be extended till April 30 to allow the healthcare system to effectively deal with the crisis at hand. West Bengal CM Mamata Banerjee demanded a special package from the central government to curb the spread of Covid-19 while Punjab CM Amarinder Singh sought special concessions for industries and the agricultural sector in addition to faster supply of rapid testing kits.

Delhi CM Arvind Kejriwal echoed the need to ramp up testing facilities and asked for the central government to assist the financially weaker sections in this time of crisis. He also recommended a bonus for farmers. "Even if central government is considering easing restrictions, under no circumstances should transport on roads, railways or air be opened at this time," Arvind Kejriwal said.

Meanwhile, the Union Home Ministry has sought the advice of the chief ministers on whether more sectors of services should be added to the list of exemptions or not.

This is the second virtual meeting the prime minister has held with chief ministers of various states. In the first meeting on March 20, before the lockdown came into effect, PM Modi had sought measures to control the spread of the novel coronavirus in India. The prime minister had also proposed a "staggered" exit from the ongoing lockdown during a video interaction with leaders of opposition parties on April 2.

The states of Odisha and Punjab have already extended the lockdown till April 30.