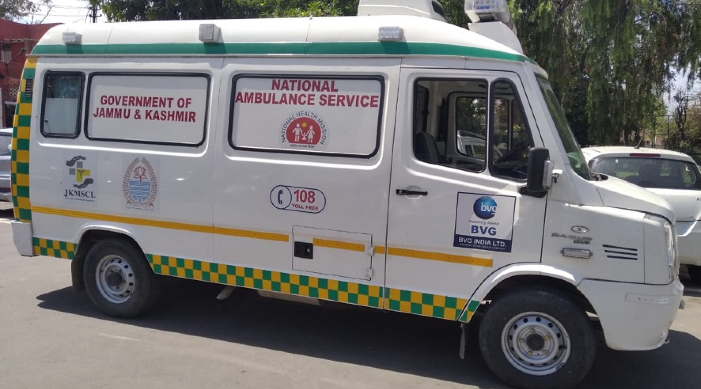 As you read this article, you may find many things taking you by surprise or you may understand how Jammu and Kashmir for decades has been deprived of the facilities that it required the most. This article may not give you the complete picture of the trials and tribulations that nearly 1.25 crore people went through all these years, but it will help you to have a better understanding about what was happening until August 5, 2019.

Let’s take the example of this 20-year-old woman from the remote mountainous region of Ramban in Jammu and Kashmir. On March 30, Shabnum was wrenching in labour pain for several hours. Her husband, a casual labourer, had no means to hire a cab to shift Shabnum to the nearby hospital. The distressed husband came to know from a neighbour about the recently launched free ambulance service in their district. A toll-free call on 108 got him an ambulance within 20 minutes to shift his wife to the hospital.

But on the way, the pain intensified and the Emergency Medical Technician (EMT) asked the driver to stop by the roadside. With the help of a doctor, the EMT offered medical support to deliver the baby safely in the ambulance. After the successful delivery, the mother and child were rushed to the district hospital Ramban, both in good health. There is a similar story from Kathua district. Sushma, 35, delivered a baby in almost the same conditions after her husband contacted 108 to shift his wife to the hospital during labor pain. Both are thankful to the Jammu Kashmir administration for this initiative that turned a life saver for them.

Ever since the fleet of 116 ambulances was launched in the twin Union Territories of Jammu and Kashmir and Ladakh, it has ferried more than 1,600 patients to the hospitals. More and more people are getting familiar with the service and despite the ongoing lockdown over coronavirus, the service seems unaffected and available to all with no charges.

While all the 25 states in the country were already availing this service since the last several years, it took almost 10 years for Jammu Kashmir and Ladakh to avail its benefits. The service was first launched in Andhra Pradesh in a Public Private Partnership (PPP) mode in 2010. Following its success, the model was expanded to Gujarat, Maharashtra and subsequently to other states. Over the next few years, the service was available across the country with a fleet of over 1100 ambulances after the Union Government signed the Memorandum of Understanding (MoU) with Bharat Vikas Group (BVG) India Pvt Ltd.

It is under this model that the Union government helps states and Union Territories initially with finances to begin the services. As the venture succeeds, it gradually shifts the responsibilities to the UT or state concerned to keep the service running in the larger interests of people. Ironically, successive regimes in the erstwhile Jammu and Kashmir state failed for 10 years to get this project up and running.

“It was kept in lingering and many hiccups were created in getting this project approved. Erstwhile Jammu Kashmir that also included Ladakh was the only state that had failed in seeking this project from the Government of India. While in other states and Union Territories, the service was already granted,” an official in the JK Administration said.

Following the abrogation of Article 370 on August 5, 2019, the state administration on a war-footing basis got this project approved and rolled out one of the largest ambulance fleets in the UT’s health sector. The fleet of ambulances was flagged off by J&K Litutenant Governor GC Murmu in Jammu on March 24.

Like the 108 project, there are many such projects launched by the union government in the past that failed to see the light of day in Jammu and Kashmir. The ambulance project is an eye opener for the people to gauge how sincere were local legislators to serve their own people

There have been allegations that regimes in the past would prioritise the projects depending on the financial outlay and only if they were routed through the state legislature. Functionaries of the state government would often lock horns with the union government and keep demanding more funds to build physical infrastructure. Whether the funds have been judicially used is yet another debate. Article 370 prevented the direct intervention of the central government into the state’s affairs.

108 services have two types of ambulances with 50 Advanced Life Saving System Ambulances and the 66 Basic Life Saving System Ambulances. It is a service free for all and is connected with GPS. With a round the clock support centre operating from Jammu, the functioning of the ambulance is directly being monitored. However, it also offers immediate services in the ambulances in order to minimize the chances of mortality until the patient reaches hospital. The ambulance is backed by a doctor to meet any emergency, EMT and a technical staff. It is ensured that the patient is administered first aid and offered all possible treatment until the ambulance evacuates the patient to the nearby hospital.

Given the geography and weather of the two UTs, the people were facing tough challenges. The existing ambulance service available with the health department was outdated with no basic life support available. The UTs had very few critical care ambulances at the disposal of common people. However, with the introduction of this fresh and modern ambulance fleet, it has given much required impetus to the UTs ailing health sector.

“Ever since the service was launched in two UTs, we get hundreds of calls on daily basis to evacuate the patients. The service is being offered promptly by highly qualified staff,” says Vikrant Gusian, head of operations for 108.

According to Gusian, the support centre receives most of the cases related to delivery and so far they have undertaken two deliveries in the ambulances. “In both the cases, the mother and child were shifted to hospital safely.”

While there are facilities available in cities, Vikrant says most of the people who avail their services hail from remote rural areas.

“The majority of people call us from remote areas as they have no cab facilities available in their villages. So it is becoming equally a challenge for us in this mountainous region to ensure the patient is shifted on time to the hospital. But our track record in Himachal Pradesh which is equally mountainous helps us in effectively serving people in Jammu and Kashmir and Ladakh now,” he adds.

The project has also created employment opportunities in the two UT’s with over 1000 people engaged. In the coming times, as the fleet is being strengthened, more people would be employed in the project.