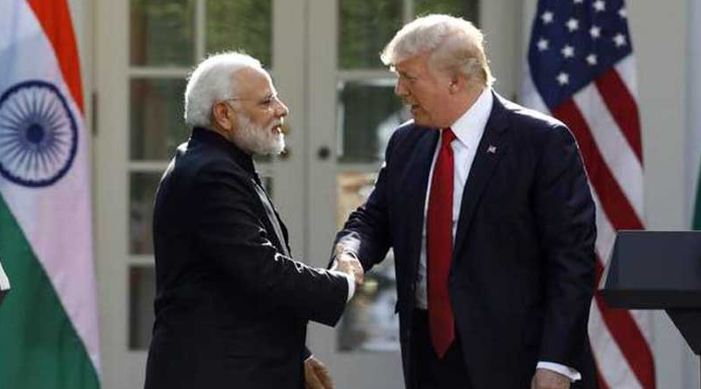 The fast-growing friendship between Prime Minister Modi and President Trump has many things in common. Both leaders are considered hardliners and known for taking unpopular decisions.

PM, Modi made the decision to revoke the status of Occupied Kashmir and the introduction of the discriminated citizenship bill. And President Trump took several unpopular choices such as Iran action, Middle-East Peace plan, and support to Israel in shifting the capital from Tel Aviv to Jerusalem.

Both are facing immense opposition in domestic politics and losing popularity. Especially the fascist policies of PM Modi are criticized domestically as well as internationally. His human rights violations have crossed all records of known history. His economic policies have made India almost collapsed. His extremist and discriminatory approach has pushed India toward disintegration. One after another failure made him lose popularity. But his authoritarian attitude strengthens his grip on power.

Similarly, President Trump faced massive opposition to the killing of Iranian General, Middle-East policies, etc. Notably, the way he has handled the Pandemic is not accepted by the ordinary American. Currently, Pandemic is the most dangerous challenge face by the whole world. There were high expectations from the U.S. As a global leader, it was expected that, with the outbreak of COVID-19, the U.S. should have proactively outreached and helped China to eliminate at a very initial stage. It might not have spread in China so widely if the International Community made collective efforts. Certainly, precious human lives have been saved globally.

In fact, when China was suffering from the outbreak, the U.S. was over-engaged in scoring political points bashing China, criticizing the draconian and authoritative laws in China—blaming China for not respecting human rights and personal freedom—trying to defame China. China ignored any pressure from the outside world and focused only on eliminating the epidemic. China mobilized it’s all possible resources, implemented strict lockdown measures, and finally overcame the outbreak.

Western World wasted time and ignored the sufferings of Chinese people and imagined that it would never happen with them. They were relaxed and, to some extent, were happy with the loss of human lives and the economic dent in China. But, what happened, China recovered and became a stable normal situation resumed almost.

The E.U. and the U.S. are facing enormous challenges. Especially the U.S. become the worst-hit country. The public in the U.S. is asking President Trump why he has waited till the Pandemic knocked the American’s doors. Why did he not take preventive measures when he knew the situation in China? There was enough time for the Trump administration to place effective measures in advance. American public is disappointed on the way how he has handled Pandemic.

One after another failure has made him unpopular. But he is determined to be re-elected. The election is scheduled in November 2020, and time is too short of restoring his popularity by routine deeds.

PM Modi won elections based on his hate against Pakistan and Muslims. Maybe he has advised President Trump to use China-Hate to win the presidential election again. Anti-China sentiments existed since the President Obama era, but since the beginning of President Trump’s administration has more visible. During the recent Pandemic, his “China-Fever” was much evident. Has he cut a little time on anti-China sentiments, and spend more on controlling Pandemic, the situation might be different. It seems a winning election is his priority over the lives of American people.

I am afraid, the hate-based vote might be another addition to the commonality between PM Modi and President Trump.

People in the United States should be very concerned about the Trump-Modi friendship as well, and not just because it represents an egregiously unethical foreign policy choice by the U.S. Of course it is. But it also has ominous implications for domestic politics in the U.S.