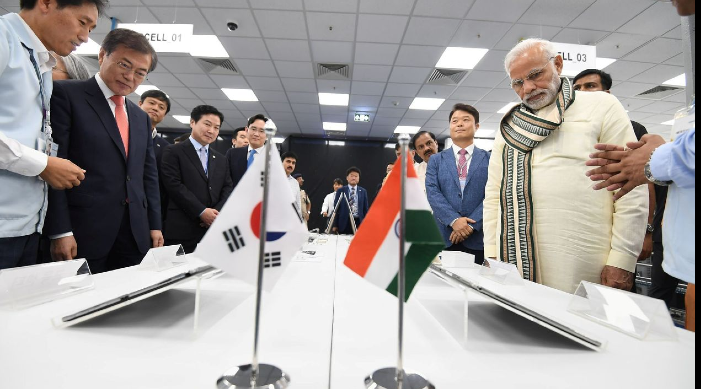 India is making a push to get Apple Inc. and other big brands to switch production there as the risks of manufacturing in China rise along with trade tensions.

Prime Minister Narendra Modi’s government has been trying to transform the country’s image as a difficult place to do business, promising a more predictable and open regulatory regime, a simpler corporate tax structure and incentives for targeted industries.

The government’s effort has become more pressing as the country struggles with an economic slowdown.

“India will be more attractive, particularly in the light of what is developing between the U.S. and China,” Finance Minister Nirmala Sitharaman said in an interview with The Wall Street Journal.

Ms. Sitharaman has slashed corporate tax rates to as low as 15% for companies that invest in the coming years. Her hope is that offering one low rate—instead of negotiating one-off deals with foreign investors that are sometimes disputed by tax authorities—will clear up the confusion foreign companies face when wading into India.

One industry Indian policy makers are targeting is cellphone manufacturing. The government is crafting a new set of rules to encourage the creation of clusters of international phone brands and parts makers that would make phones exclusively for export, according to people familiar with the plans. Companies in the clusters would have lower import tariffs for components and would be first set up in states that guarantee rents and electricity bills won’t be raised for 10 years, the people said.

Minister of Electronics and Information Technology Ravi Shankar Prasad met with the leaders of more than 50 phone and electronics companies last month to discuss their needs, they said. He told them Apple was hoping to make India a new major source of exports, a government official said.

“Apple is looking for alternative countries to shift some of its manufacturing out of China amid the trade war with the U.S.,” he said. “We are one of the big countries which can provide an alternative.”

Samsung Electronics Inc. is already building one of its biggest facilities in the world near New Delhi, and existing factories that manufacture for Apple are retooling their operations to make some of the company’s most sophisticated phones for the first time in India. Both have been asking for concessions to make India a more competitive place to invest.

Whether India can successfully position itself as a winner in the trade brawl between the U.S. and China could be decisive is whether the world moves from its dependence on China’s massive manufacturing capacity.

Close to $72 billion in imports to the U.S. from low-cost countries in Asia has shifted away from China in recent years, according to a report from consulting firm A.T. Kearney. After Vietnam, which has captured the lion’s share of the shift, India is the second-largest destination.

Foreign executives and economists say India has usually been too slow to compete with the nimble Asian countries that don’t have to deal with the legislative delays common in a diverse democracy. The government, they say, needs to do more to attract investment and develop a bigger export industry if it wants to become the next China.

With economic growth in India at a six-year low, New Delhi could benefit from a bigger inflow of overseas investment. The government has eased restrictions on some foreign retailers and opened a few industries, such as contract manufacturing, to more foreign control in recent months. But it has yet to take steps that would make it significantly easier to do business.

The country has a history of punishing successful companies—both local and international. Nokia was one of the first global electronics brands to make a large manufacturing wager on India when it set up a facility in 2007. It was employing more than 30,000 people in 2013 when the taxman came knocking, saying it owed more than $500 million in back taxes. Nokia fought the tax bill in court, but its factory was shut down in 2014 during proceedings and never reopened.

Many foreign manufacturers have shifted production from China to places like Vietnam, which have proven more predictable and have the advantage of being closer to Chinese suppliers and American consumers, economists and executives say.

One of the biggest votes of confidence in India in recent years has been the rapid expansion Foxconn Technology Group’s manufacturing operations. The company has gone from a few hundred employees in southern India to more than 30,000 in the past three years, and it could double that figure in the coming years, government officials say. And 300 parts suppliers have also set up shop in India, contributing to Foxconn’s capacity of more than 50 million phones a year.

In a Foxconn factory a couple of hours outside the southern city of Chennai, mostly female employees in white coats and hair nets monitor and feed parts into rows of state-of-the-art machines, which place thousands of tiny components on the circuit boards used in high-end smartphones.

“With this global footprint of our production, I think we are one of the most capable ones to face the challenge when the trade war goes sour,” Young-Way Liu, the head of Foxconn’s semiconductor business group, said on a conference call in June.

If New Delhi can put together the right set of policies, it could see much more investment from Foxconn and others, say economists and executives. Even before the flare-up in trade problems, Foxconn Chief Executive Terry Gou told Mr. Modi during a visit in 2015 that he wanted to make India as important a source of products as China.

New Delhi has created a panel to recommend new policy to attract more investment. A new policy could be rolled out this year, said government officials familiar with the timeline.

“We are moving towards removing all kinds of restrictions” on foreign investment in a variety of sectors, said Finance Minister Sitharaman. “We want to make it simple.”