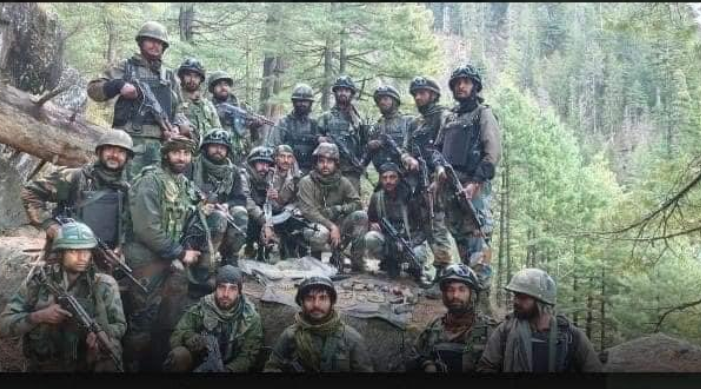 File photo of weapons recovered along the Line of Control in Kashmir. (Source –Twitter @ChinarcorpsIA)

In the first week of April that also set the beginning of summer in Kashmir, the Indian army lost five elite soldiers in the Keran sector of North Kashmir while eliminating five terrorists in a dreaded gunfight alongside the Line of Control (LoC). The five soldiers belonged to the elite force that conducted the surgical strike in Pakistan in 2018. Locals claim that this was one of the most fierce gun fights they witnessed in recent times. Along the five, one is believed to be the local terrorist.

The Keran sector is a hotspot for the infiltration by terrorists given its geographical continuity, porous borders, deep gorges and dense cover of forests. Every year when the summer arrives, the area is often in the spotlight with terrorists caught engaging the army to sneak into the valley. This year, it was the first major attempt made by the terrorists to infiltrate in Jammu and Kashmir and was successfully foiled by the army. The killing of five soldiers in the exchange of fire between two sides has prompted the army to understand the revived strategy of terrorists post August 5, 2019. The Indian Army believes that the strategy of terrorists backed by the Pakistan Army is now modified and improved and this led to the unfortunate loss of five elite soldiers.

Post abrogation of Article 370, the border skirmishes initiated by Pakistan - both at Line of Control and the International Border in the Jammu region are directly connected to the country’s flawed and failed diplomatic efforts at the global forum. After the significant constitutional changes in Jammu and Kashmir that ushered in the erstwhile state’s full integrity with the Union of India, Pakistan upped its ante diplomatically and tried to globalise the Kashmir issue. Pakistan Prime Minister Imran Khan was hoping against hope. Pakistan put a strategic pause on violence for several months in 2019 in Kashmir to avoid any criticism at the global level amid its diplomatic efforts of raising the issue. From the United Nations to reaching out separately to all the influential world powers, Khan returned home embarrassed and disappointed. His frustration and dejection could be well gauged from his statement later stating that the world is more glued to economic interests and not human rights, an apparent reference to his diplomatic failure against India in seeking support from the countries over Kashmir.

This is not the only front where Pakistan has failed. The consistent provocations in the last over 7 months by the Pakistani media followed by the Inter-Services Intelligence (ISI) and the political leadership failed to build any social unrest in Jammu and Kashmir. Not a single protest over the central government’s constitutional changes in Kashmir was reported. Instead, the people of Jammu and Kashmir are reposing their complete faith in the Narendra Modi government and are waiting for the new dawn of socioeconomic development of the region that had unfortunately been neglected by successive regimes.

Why Pak resorts to its old tactics - terrorism

Unable to come to terms with its complete economic failure in the country followed by international embarrassment over Kashmir, Imran Khan eventually pinned hopes on the actual power centre in Rawalpindi to find an escape. This was evident from the killing of five terrorists armed with highly sophisticated weapons and superior training skills. The army assessment suggests that the terrorists had gone through the rigorous training sessions before making infiltration attempts. It was the first time that the terrorists were carrying night vision glasses along and all the requirements that were needed to sustain an operation for a long duration.

Post the Keran operation, the internal operational assessment has made the army believe that the Pakistani Army wants the maximum number of terrorists to be able to infiltrate into the Valley in the beginning of summer. The massive losses to Pakistan-sponsored terrorism in Kashmir in the previous three years has created substantial vacuum in the ranks of terrorists. In case Pakistan wants to sustain terrorism in Kashmir, it is required to send at least some top leadership from across the border. Intelligence reports suggest that the Pak army under its fresh strategy is attempting to create new groups led by foreign terrorists and logistically backed by local recruits. The combination of both could prove lethal and efforts in the hinterland are being made to foil any such strategy. While the local recruits have poor motivation in joining the rebel groups for fear of being caught in counter-insurgency operations, the strategy across the border is geared towards countering this by sustaining their motivation under the command of foreign terrorists. This is how Khan now wants to internationalise Kashmir and keep hogging the headlines in international media.

How India can deal with the situation

The political and diplomatic failure of Pakistan in internationalising Kashmir has left it frustrated and dejected. The intelligence reports suggest that many fresh camps to train the terrorists before sending them to Kashmir have been built up in various parts of Pak-occupied Jammu and Kashmir (PoJK). Mirpur is the new concentration area for the army and reports suggest that besides Kashmir, the Pak army is also focusing on reviving the terrorism in Chenab valley and Pir Panjal range of Jammu region. To ensure that Pakistan’s proxy war may not mislead the local populace, India needs to take some crucial measures both on the political and economic front without lowering its guard on the security front.

As the constitutional barriers have been removed and Jammu and Kashmir is fully integrated with India, New Delhi needs to accelerate the wheels of socioeconomic development in the region. India has to seize this opportunity and deliver on the promises it has made to the people of the erstwhile state.

After revoking Article 370 and converting the state into two Union territories, the deep rooted anti-national elements have fallen silent and all those who were acting at the behest of their masters across the border have also been exposed. The status quo has been dismantled and the dawn of a new beginning has been scripted. In such a situation, these inimical elements must be exploring ways to reassemble and pursue the agenda of Pakistan. But India can defeat them permanently provided it takes some effective measures.

Firstly, the security forces have to play a major role; it is not only the Line of Control (Line of Control), now Pakistan is also making efforts to push terrorists from the International Border (IB) under the cover of ceasefire violations. In the last few weeks, a number of ceasefire violations have been reported both along the LoC and the IB in the Jammu region. The level of surveillance needs to be intensified to bring down the infiltration attempts drastically. The Pakistan Army may try to provoke the Indian Army by attacking the residential areas to ensure civilian casualties. This needs to be dealt with strategically in order to reflect India’s long-term commitment to protecting human lives. The barbaric acts of inflicting damage to the civilian population could be the act of Pakistan only as was on display in Kupwara recently. Three civilians, including a 10-year-old child, were killed after Pakistan army fired mortar shells into civilian areas to facilitate an infiltration bid.

In the hinterland, the area domination and intelligence grid also needs to be strengthened. As this would be the job done by security forces, there is also a need to scrutinise the decision making bodies in the administrative set up. Some people at the helm of affairs who try to become a hurdle in pro-people initiatives to keep public anger at bay must be dealt strictly. The officials who enjoy public faith and deliver efficiently should be encouraged and placed at critical positions to achieve the set targets. In the ongoing summer, the intelligence reports do not suggest any social unrest. Peace is anticipated in the region for some time since Pakistan has lost the ground in new socio political arrangements. India should make the best use of this opportunity. It should build the Kashmir that it has promised. A chance should be given to the local youth to build a “Naya Kashmir” (New Kashmir), economically and politically.