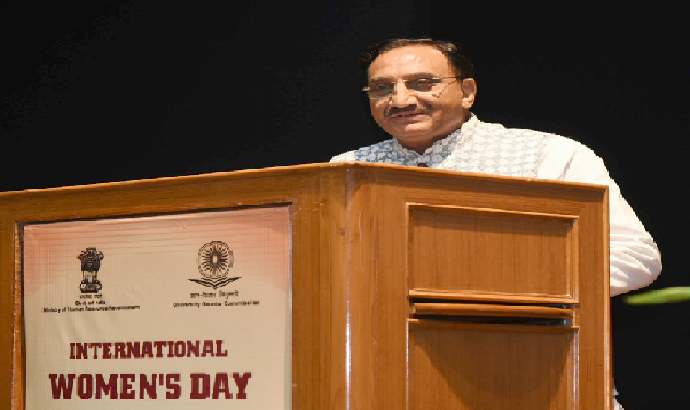 Union HRD Minister Shri Ramesh Pokhriyal'Nishank' alongwithMinister of State for HRD, Shri Sanjay Dhotre interacted with Education Ministers and Education Secretaries of all the States through video conferencing today. Education Ministers of 22 States and secretaries from 14 States and Union Territories attended the conference. Secretary, Department of School Education and Literacy Smt Anita Karwal and senior officials of the Ministry participated in the meeting.

While addressing the meeting Union Minister said that the current situation of COVID-19 is unfortunate, but it is time to act wisely and turn the situation into opportunity by doing new experiments to ensure safety and academic welfare of students. The Minister said that while addressing the monthly 'Mann ki Baat' programme, our Prime Minister also said that India's fight against the novel coronavirus has become people-driven wherein every citizen is playing his or her part. Be it businesses, offices, education institutes or medical sector, everyone is adapting to changes in the post-coronavirus world. The Minister hoped that together we will be able to deal with this disease and the situation.

Shri Pokhriyal said that our whole efforts should be that our 33 crore students do not face any difficulty and can continue their education. For this, various efforts are being made to strengthen the online education platforms like DIKSHA, Swayam, SwayamPrabha, Vidyadaan 2.0, E-Pathshala, Educational TV Channel of Doordarshan, DishTV, Tata Sky, Jio, Airtel DTH etc. The Minister also said that apart from this, alternative academic calendar has also been released by NCERT which states can adopt according to their local situation. Also we have to prepare safety guidelines in case of opening of schools.

Considering the health of the students, Union Minister said that in the event of lockdown, ration is being provided under mid-day meal for the children to get adequate and nutritious food. The Minister announced a land mark decision that Approval is being given for providing mid-day meal during summer holidays of schools, on which an additional expenditure of about 1600 crores will be made. In addition, under the Mid-Day Meal Scheme, an Ad-hoc grant of Rs 2500 crore is being issued for the first quarter.

To augment the Mid-day meal program,the Minster announced that in wake of COVID-19, the annual central allocation of cooking cost (for procurement of pulses, vegetable, oil, spices and fuel) under Mid Day Meal Scheme is enhanced to Rs. 8100 crore from Rs 7,300 crore ( an increment of 10.99%).

Shri Pokhriyal informed that under SamagraShiksha, relaxing the norms,GOI has allowed the states to spend the balance of the previous year which is around Rs. 6200 crore and an Ad-hoc grant of Rs 4450 crore is also being issued for the first quarter. The Minister also requested states to immediately transfer the amount released under SamagraShiksha to the State Implementation Committee so that it can be utilized properly to ensure that the next instalment can be released.

During the meeting the Minister informed that on the request of Ministry of HRD regarding the availability of text books in the stores, Ministry of Home affairs has relaxed the lockdown rules to open the bookstores so that students can avail books to continue their studies.

Shri Pokhriyal said that the States where KendriyaVidyalaya and NavodayaVidyalaya are approved but could not be started due to lack of land or running on less capacity, are requested to transfer the land quickly so that the children of the State can get benefit from it.

The Minister appealed to all the States to start the process of evaluation of answer sheets of Board exams and facilitate CBSE to evaluate answer sheets of the students in their respective States.

Shri Pokhriyalkeenly listened to all the problems and suggestions made by the States Ministers and officers. States also appreciated the efforts made by the Ministry of Human Resource Development for providing all possible help to States to ensure academic welfare of students. The Union Minister thanked all the Ministers and officials of the States for their commendable work in the field education and assured them that the Ministry will extend its full support in this difficult time and together we will fight this problem.