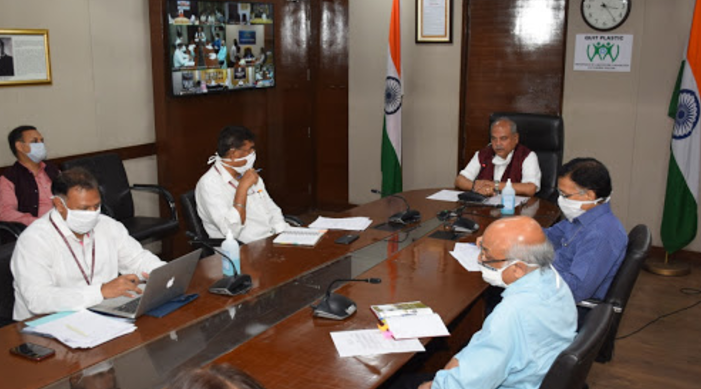 The Rural Development Ministry has sanctioned Rs. 33,300 crore under MGNREGA

As per the press release, the Union Minister informed the state minister and officials that his ministry has already released Rs. 36,400 crore in the current financial year to them. The Rural Development Ministry has sanctioned Rs. 33,300 crore under MGNREGA out of which Rs. 20,624 crore has been released to liquidate all outstanding dues of previous years towards wages and material.

This sanctioned amount is sufficient to meet expenses under MGNRGS till June 2020. The Minister assured the state ministers that sufficient financial resources are available for different rural development programmes.

He emphasised that under MGNREGS, the focus should be on water conservation, ground water recharge and irrigation work in convergence with the Schemes of Ministry of Jal Shakti and Department of Land Resources. Joint Guidelines have been issued in this regard.

He requested the Ministers and officers of the States/ UTs to direct concerned officers at district level to identify such works in coordination with the line departments/offices and to start the works urgently.

He appreciated the fact that women SHGs under NRLM have made 5.42 lakh protective face covers (face masks), 3 lakh litres of sanitizers and soaps and are running more than 10,000 community kitchens to feed the stranded labour etc in different parts of the country, thus doing a great service to the nation in fight against COVID-19.

Under PMGSY, the focus would be on quick award of works in sanctioned road projects and starting of pending road projects. The contractors, suppliers, workers etc should be galvanised to start the works.

All the States and UTs were in total agreement with the suggestions made by the Union Minister for Rural Development, Panchayati Raj and Agriculture and Farmers’ Welfare. The states of Tripura, Uttarakhand, Manipur, Sikkim and Meghalaya in particular, thanked the Union Government for releasing all pending wages and material dues under MGNREGS.

All States and UTs assured that with the active support of the Union government, they will make all possible efforts to ensure that rural development schemes are implemented in an effective and efficient manner so that the pain arising out of COVID-19 is mitigated to the maximum extent possible. They also assured that they would make all efforts to follow the guidelines issued by the Union Home Ministry, Ministry of Health and Family Welfare and Ministry of Rural Development.