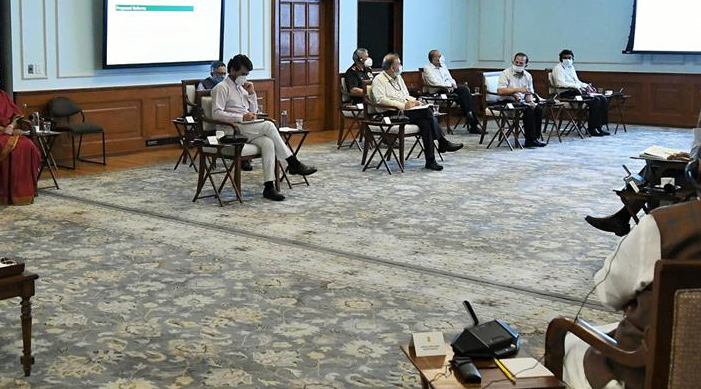 Prime Minister Narendra Modi on Thursday held a detailed meeting with his senior cabinet colleagues and discussed way forward to reforms in the defence sector “to ensure a robust and self-reliant defence industry that caters to short and long term needs of the armed forces.”

As per the release from the Prime Minister’s Office, the discussions involved reforming of the functioning of the Ordnance factories, streamlining procurement procedures, focused resource allocation, encouraging R&D and innovation, attracting investment in critical defence technologies and promotion of exports.

During the meeting attended by Defence Minister Rajnath Singh, Home Minister Amit Shah, Finance Minister Nirmala Sitharaman and senior officials, Prime Minister laid emphasis on positioning India among the top countries of the world in defence and aerospace sectors, from design to production, with active participation of public and private sector fulfilling the twin objectives of self-reliance and exports.

He reviewed the proposed reforms for attracting domestic and foreign investment in the defence sector. It was discussed that defence expenditure be economized and the savings be channelised for strategic defence capital acquisition.

Issues relating to defence procurement processes, offset policies, indigenization of spares, transfer of technology, attracting global OEMs to establish manufacturing facilities in India, expanding our presence in international supply chains and others were also discussed in the meeting. For India to emerge as a global leader in defence manufacturing, focus on the export of quality and state-of-the-art equipment/systems/platforms has also been emphasised.

PM directed that India should reduce dependence on imports and take forward “Make in India” to build its domestic capabilities for designing, developing and manufacturing state-of-the-art defence equipment.

He emphasized on initiatives to promote export of defence products along with industry participation in the global defence product value chain and to create an environment that encourages R&D, rewards innovation and creates Indian IP ownership.