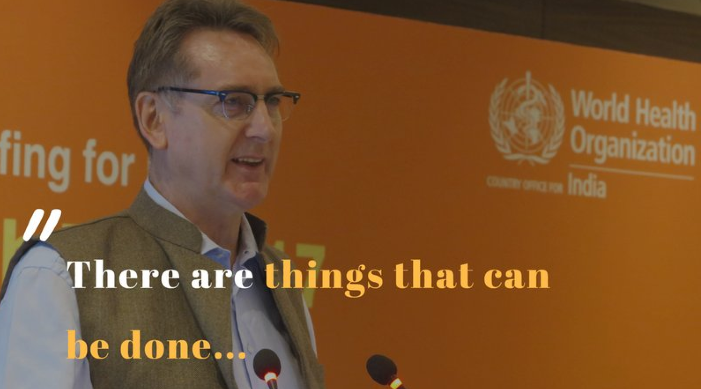 Given the size and diversity, the entire population of the country cannot be viewed as a single unit, said WHO representative

India has managed to keep its number of Covid-19 cases relatively low with its quick, aggressive and effective response to the pandemic, and could consider shifting the decision-making power to states and districts for better implementation, Dr Henk Bekedam, the WHO representative to India told The Print in an exclusive interview.

Applauding the decision to impose a national lockdown, Bekedam, who served for two years in Egypt before taking up his current role in November 2015, said India has been able to use the lockdown “well”.

“With the lockdown, India has introduced a window of opportunity to defeat the virus. The lockdown window has been well utilised to ramp up the public health capacity and strengthen the surveillance to respond effectively to the virus,” he told The Print.

“For a country of this size and its diversity, India has so far managed to keep cases relatively low — this is by rolling out quick, aggressive and effective response,” he said.

A medical doctor by training, Bekedam said tracking local epidemiology would be critical in looking ahead and planning further measures.

“Given the size and diversity, the entire population of the country cannot be viewed as a single unit. Each state, and districts within the states, will have its own epidemic curve and experience (of) varying pace of the spread of the virus based on their adherence to guidance and exposure to the virus,” said Bekedam said.

A Dutch national, he was the WHO representative to China from 2002 to 2007. His team was instrumental in supporting China in containing the Severe Acute Respiratory Syndrome (SARS) outbreak in 2003.

Talking about the road ahead, he went to add “it is important to know that we are dealing with a new and unpredictable virus”.

“Different states and districts will experience different epidemiological reality. Therefore, the strategy will need to be accordingly calibrated,” he said.

For India, he suggested that the new strategy would need to be based on scientific evidence and situations, taking into account other critical issues, such as economic factors (the farming season, etc), security-related factors, human rights, food security, public sentiment and adherence to containment measures.

What stands in India’s stead is its serious and bold, preemptive interventions at the early onset of the outbreak, said Bekedam.

He also highlighted how India got the benefit of learning from the experience of other countries.

“India’s response has been graded and accentuated by political commitment at the highest level. The Prime Minister’s Office has led the preparedness and response measures against Covid-19, mobilising all ministries…,” he said, and added that India is a good example of a holistic government and societal approach.

Bekedam did not comment on whether India’s testing rate is satisfactory, but reiterated that testing is an important component of surveillance and guides contract tracing, isolation and treatment.

“It also shows where response efforts need to be directed to combat the disease,” he added.

On present testing rate, he said, “India has been calibrating its testing strategy as per the transmission scenario, taking into account scope, need and capacity.

“We understand that the testing strategy would be further calibrated and expanded in line with the recommendations of the Empowered Group Two, which is coordinating the availability of hospitals, isolation and quarantine facilities, disease surveillance, testing and critical care training,” he said.

Under the empowered committee, which is led by C.K. Mishra, secretary, Ministry of Environment, Forest and Climate Change, the number of tests went up around 33 times in 30 days. On 23 March 14,915 tests were conducted, but by 22 April, more than 5 lakh tests were done.

“India is in an evolving situation … that is the reason why containment zones are defined, and districts are categorised as red, orange and green, and their status changes as per the situation. However, whatever the categorisation, the key public health measures remain — detect, test, treat and trace — to break the chain of transmission,” he said.