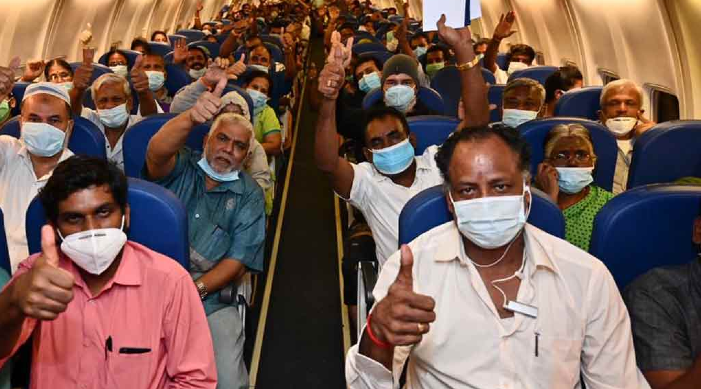 Three flights with 545 passengers from the Gulf arrived in Kochi on Saturday night as part of India's Vande Bharat Mission to bring home its nationals stranded due to the global COVID-19 lockdown.

Nine flights, including three to Kerala, had been charted for Saturday.

The first flight to Kerala on Saturday departed from Kuwait City at 5pm India time (2:30 pm local time) with 181 passengers including 4 infants. It arrived at the Cochin International Airport at 9:26pm.

Air India's IX 442 flight from Oman's capital Muscat with 181 passengers arrived in Kochi at 10pm. The flight had 48 pregnant women and four infants on board.

Another flight, Air India Express IX 476 from Doha arrived at the Cochin Airport at 2:05am on Sunday with 177 adults and six infants on board.

Earlier on the day, Air India's IX 612 brought back 129 evacuees from Dhaka to New Delhi's IGI Airport at 3:06pm. Another flight with 182 passengers, mostly nurses, from Sharjah arrived in Lucknow on Saturday evening.

Official sources said all the passengers arriving on the special flights to Kerala would be subjected to COVID-19 rapid test at the airport before transferring them to their respective destinations by special taxis and state-run KSRTC buses.

As per the norms, all the pregnant women and children would be transported to their homes and others would be shifted to coronavirus care centres in their home districts.

Two flights carrying a total of 335 people from the Gulf countries landed in Kerala's two airports on Friday night.

Two flights had landed at Kochi and Kozhikode on Thursday from Abu Dhabi and Dubai, respectively.

The passengers were subjected to thermal test at the aerobridge itself before allowing them to undergo customs and immigration checks, Kozhikode airport sources said.

On Sunday, two flights will be operated to Kerala- Doha to Thiruvananthapuram and Kuala Lumpur to Kochi.

Meanwhile, Indian Navy Ship Jalashwa has set sail from Male to Kochi in Kerala with 698 Indians nationals who were stranded in Maldives, senior Navy officials said.

A total of 64 Air India flights and two ships are being operated as part of India's massive repatriation drive, Vande Bharat Mission, that began on Thursday to bring stranded Indians home from various countries like the UK, the UAE, the US, Maldives, Bahrain and Singapore.

From the Gulf countries to Malaysia and the UK to the US, the multi-agency operation will see the state-owned airline operate non-scheduled commercial flights till May 14 to ferry around 15,000 Indian nationals from 12 countries.

Inside this mission, the Navy had launched Operation Samudra Setu (Sea Bridge) under which it dispatched two ships to Male to commence the first phase of the evacuation operations from Friday.