At NSA Ajit Doval’s mega Kashmir meet, a stinker for Pak and a piece of advice 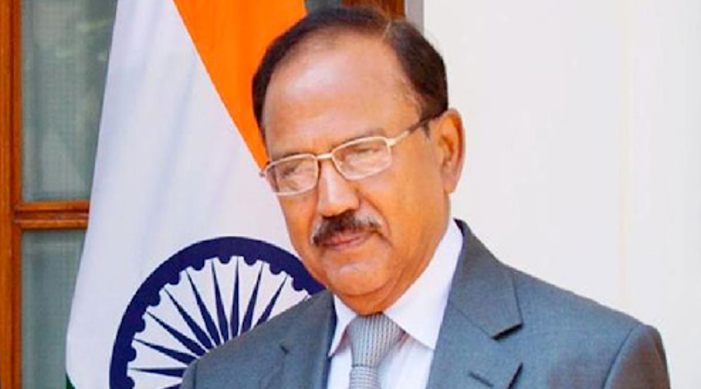 At his five-hour long meeting to review the operational strategies and tactics of security forces in Jammu and Kashmir, National Security Adviser Ajit Doval showered praises on security forces for the successful elimination of Kashmir’s Hizbul Mujahideen chief Riyaz Naikoo over the week.

In that praise, Doval also slipped in a message: the importance of developing actionable human intelligence and operational synergy among forces fronting the counter-terror operations.

The Special Operations Group of the Jammu and Kashmir Police had been working on people in the Kupwara district who had had access to Riyaz Naikoo.

As Jammu and Kashmir chief Dilbag Singh told this newspaper later, one of them was a man who had played a role in building the secret bunker in his native village in south Kashmir’s Pulwama.

The intelligence was pinpointed. The security forces didn’t give up when they couldn’t locate him in the first round and kept up the search.

Riyaz Naikoo’s elimination, a serious setback to terror group Hizbul Mujahideen in south Kashmir, is considered one of the most successful security operations in recent months in Jammu and Kashmir.

In a video of Naikoo’s boss mourning his death, the Hizbul founder who also leads the Pakistan’s ISI-backed alliance of terror groups United Jihad Council, Syed Salahuddin said the mujahideen (terrorists) had broken the back of the enemy (India) in Handwara Rajwar recently “but the enemy (India) has the edge”.

Imran Khan’s recent tweet on Kashmir that attributed violence in Kashmir to an “indigenous resistance movement” and accused India of finding a pretext to launch a “false flag operation” also found a reference at the meeting.

This remark has been interpreted in New Delhi to imply that the TRF model of funding terror and denying a role in terrorism in Kashmir was the template. As long as it works.

What it means for Kashmir

A senior government official who was present at Doval’s marathon meeting - he let the officers do most of the talking - told Hindustan Times that Pakistan’s determination to have a stab at pushing terror this year coincided with his simultaneous effort to try to internationalise developments in Kashmir. The decision to place the Pakistan Air Force on alert this week pointed in this direction.

For security forces in Kashmir, this implied that they would have to scale up the counter-infiltration grid along the Line of Control and the counter-insurgency grid in the Kashmir valley. Doval told security forces deployed along the line of control to ensure that terrorists from Pakistan don’t slip past them, day or night. Last month, about 25-30 of them did.

There will be more attempts this month.

Intelligence agencies have had to update their estimate of about 230 terrorists at the terror launch pads in Pakistan-occupied Kashmir within just about three weeks when their number shot up to 450.

The biggest contingent is aligned to the Lashkar-e-Taiba (244) and the Jaish-e-Mohammed (129), which plans to carryy out simultaneous attacks on 11 May. The Hizbul Mujahideen, which has a depleted strength in South Kashmir, had about 60.

The army and Border Security Force shared their plans how they intended to minimise the possibility of terrorists slipping in, plans that officials said did require some tweaks.