There is global recognition for India’s success in handling Covid-19: PM Modi 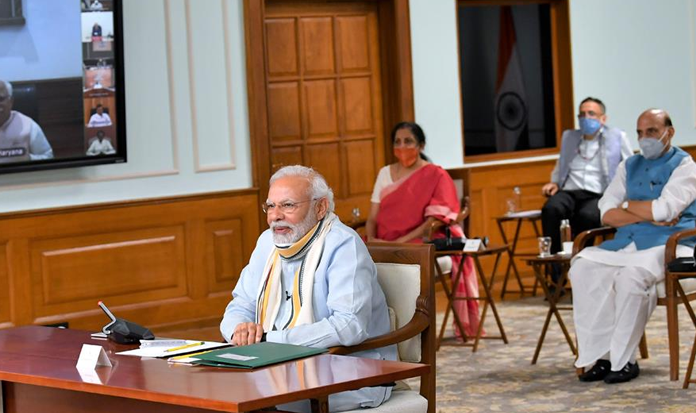 The road ahead should be focused on reducing the spread of Covid-19 and ensuring that all precautions were taken by people, including social distancing norms, by observing “Do Gaaj Doori,” Prime Minister Narendra Modi said while talking with state chief ministers via video conference on Monday.

Prime Minister Modi thanked the state governments for playing a major role in this fight.

“They understood their responsibilities and served their role in countering the threat. The Cabinet secretary is in constant touch with the secretary of all states. We need to stay more focussed and stay alert and proceed with a balanced strategy. We have to work on deciding the path to take in battle against the threat. Guidelines will be set with everyone's suggestions,” he said at the meeting.

He said the government always stressed that people should stay where they are during the lockdown, but despite that, it's human tendency to want to go home during a crisis; and hence, the government had to modify or change its decision.

“Now, there's a big challenge that the disease does not spread to villages,” the Prime Minister said while talking about migrants who are being ferried from different states to their hometowns on special “Shramik” trains run by the government.

"There is global recognition for India’s success in handling the pandemic and India appreciates the efforts made by all state governments in this regard. Let us stay the course as we move forward together," said.

"Slowly but surely, economic activities have begun to pick up in several parts of the country. In the coming days, this process will further gather steam. We must realize that the fight against Covid-19 has to be more focused now. Going forward, the road ahead should be focused on reducing the spread and ensuring that all precautions are taken by people including social distancing norms by observing ‘Do Gaj Doori’ (six-feet distance)," Modi said.

Earlier, chief ministers of states like Telangana, Tamil Nadu and Chhattisgarh opposed the resumption of train services from Tuesday and asked the Centre to push it back, warning that it would make it harder to identify, isolate and test suspected Covid-19 cases and could lead to chaos in the state.