In a first, President Kovind accepts credentials of foreign envoys via video 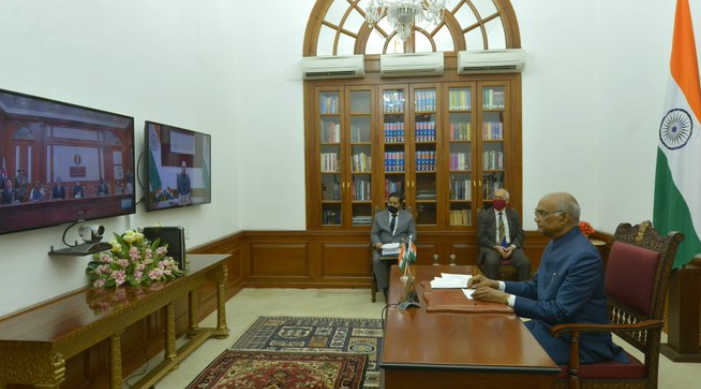 It was digital diplomacy of a different kind as President Ram Nath Kovind accepted credentials from Ambassadors and High Commissioners of seven countries via video conference on Thursday.

This was the first time in the history of Rashtrapati Bhavan that credentials were presented through the digital medium, said an official statement.

Presentation of credentials by envoys is usually part of an elaborate ceremony organised at the Rashtrapati Bhavan. The video conference was organised keeping in mind the precautions including social distancing that need to be taken to prevent the spread of Covid-19.

The envoys who presented their credentials were from the Democratic People’s Republic of Korea, Senegal, Trinidad & Tobago, Mauritius, Australia, Cote d’Ivoire and Rwanda.

In a post on Twitter, President Kovind remarked that digital technology had enabled the world to overcome the challenges posed by COVID-19 and carry out its functions in an innovative manner.

The President called the digitally-enabled credentials ceremony a special day in India’s engagement with the diplomatic community in New Delhi. He noted that India remains committed to harnessing the limitless possibilities of the digital pathway for the advancement of its people and the world at large.

Addressing the envoys, President Kovind said that the Covid-19 pandemic posed an unprecedented challenge to the global community, and the crisis called for greater global cooperation. He pointed out that India has been in the forefront of extending support to fellow nations in fighting the pandemic, the official statement said.

The Ambassadors/High Commissioners who presented their credentials were: -