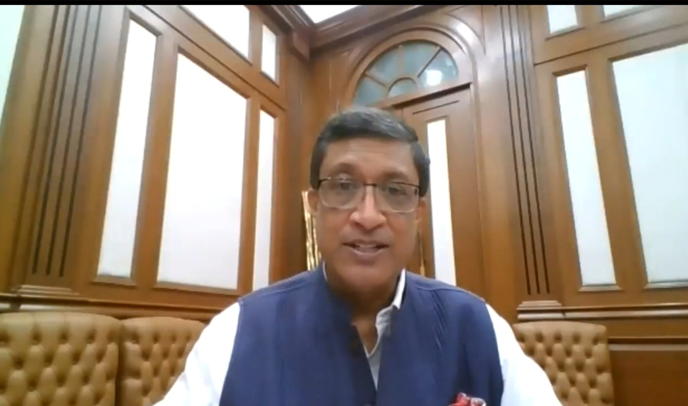 India is ready to play a new role in reinventing the global economic order in the wake of the coronavirus pandemic, Sanjay Bhattacharya, Secretary Overseas Indian Affairs, Consular Passports Visa, in the Ministry of External Affairs said on Wednesday.

Strong multilateral cooperation will be a key in the time to come, he said, addressing a webinar organised by the Persons of Indian Origin Chamber of Commerce and Industry (PIO CCI).

Emphasising that the pandemic has presented India with a major economic opportunity, Bhatacharya underlined the need to promote the frontline technology by linking it up with start-ups and the foreign markets so that they could become enablers for economic growth.

Interacting with over 130 participants from different parts of the globe through video conference, the Secretary Overseas Indian Affairs expressed hoped that India would be a factor in the global chain for new forms of cooperation.

Pointing out that the diaspora is an asset to India, he said the government has been working closely to leverage each other's strengths.

He used the opportunity to explain how India had taken very early action to combat coronavirus starting with travel restrictions in late January, airport screening in early February, a travel ban in mid-March, and a national lockdown in late March.

India has ramped up its healthcare preparedness, with over a lakh coronavirus tests per day and vigorous contact tracing through Aarogya Setu.

“The virus in India has certainly slowed down, the doubling rate has now increased to 14 days. It’s rampant spread has been checked and will be overcome in due course,” he pointed out.

Deep impact on the economy

Referring to the projection by the International Monetary Fund (IMF) that the coronavirus pandemic’s impact could be in the range of 6-9 trillion dollars, Bhattacharya said that economic growth will pick up. “But there will still be a contraction of global GDP by as much as 3 per cent,” he said.

The changes would impact all sectors, with tightened financial market conditions and altered consumption patterns.

Coranavirus is “forcing us to regroup and reform so that we can reinvent the global economic order,” he said

On the road ahead for India, he said that the textiles sector is seeing a revival while the electronics industry is growing very rapidly. Fundamental reforms in agriculture would empower farmers. “Building on our strengths and enhancing our potential is key,” he emphasised.

Responding to a question about the scope of investments in India’s tourism sector, Amb. Bhattacharya said the Ministry of Commerce and Industry has set up a portal called Invest India to provide information on important rules and regulations for investment in different sectors of economy. A case officer would handhold those interested in investment, he pointed out.

The government has worked to facilitate the economic engagement of the diaspora, Manish, Joint Secretary, Overseas India Affairs II, said while addressing the webinar.

Several changes has been made to facilitate investments by OCIs, Persons of India Origin, and Non-Resident Indians, he pointed out. The Indian visa is being developed as an enabler of the country’s economic growth and stimulating job creation, he explained.

"We are working on our strength as a global pharmacy for generic drugs, including APIs. The healthcare sector is one of the major areas where the diaspora can participate," he added.

PIOCCI Secretary General Abhay Aggarwal introduced participants from across the globe and the senior MEA officials who spoke during the webinar. He also gave an overview of the organisation’s activities. Vice President Munish Gupta moderated the interaction.

The webinar was joined by well-known Indian origin persons like Virendra Sharma from the United Kingdom, Mukteshwar Chuni, a former Mauritian diplomat, Kanwaljeet Singh Bakshi, a Member of Parliament from New Zealand, and others.

PIOCCI is a global business platform working closely with reputed entrepreneurs and the Indian Diaspora to promote investment and international trade opportunities.