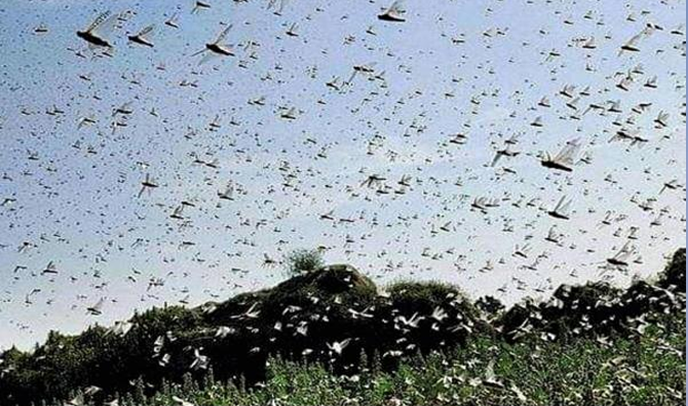 As states in western and central India struggle to contain locust invasion, Jammu and Kashmir government has issued instructions for crop protection and asked the departments concerned to take pre-emptive measures to contain the worst infestation in nearly three decades.

J&K Principal Secretary, Agriculture Production Department, Navin Choudhary said directions have been passed to the officials concerned to be on high alert.

“Locust menace is hyperactive currently in the neighbouring countries of Iran and Pakistan and has also entered India in the states of Rajasthan, Madhya Pradesh and Maharashtra. Our own neighbouring State, the Punjab, is on high alert,” he informed.

According to an official handout, the Principal Secretary has asked the directors of Agriculture Department Kashmir and Jammu to constitute division-and district-level teams to monitor influx of locust and take immediate necessary protection measures.

He has also directed the Agricultural Universities in the Union Territory to constitute dedicated teams of scientists, who will analyse the pattern of influx and guide extension workers and farmers in tackling the locust swarms.

Choudhary has also directed both the directorates to stock Malathium and other chemicals generally used to kill the locust immediately. Both the directors were asked to immediately procure the chemicals in reasonable quantities and also get in touch with Hindustan Insecticides Limited, which manufactures Malathium.

Locusts, which can cover up to 150 km a day, can eat more than its body weight. One square kilometre of a locust swarm, containing around four crore locusts, can eat as much food as 35,000 people in a day. Experts blame the growing menace of desert locusts on climate change. They say breeding of locusts is directly related to soil moisture and food availability.

Meanwhile, representatives of J&K Fire and Emergency Services have conveyed that a maximum number of fire tenders shall be made available for spraying if the situation demands so.