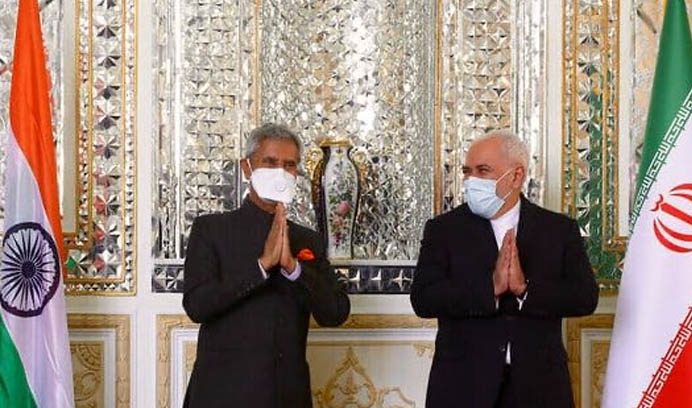 Iran and China are on the verge of concluding an economic and strategic partnership agreement of worth $400 billion, but India wants to ensure that the Chabahar project in this middle-east country doesn’t see any involvement of China.

India has funded the construction of terminals at Chabahar Port which recently facilitated the movement of cargo to South Asia and Southeast Asia despite slowdown in the global trade due to the Covid-19 pandemic. In December 2018, the Chabahar Port was operationalized. Iran is planning to increase the capacity of the port from the current 2.5 million tonnes to 8.5 million tonnes.

During the stopover in Tehran, EAM Jaishankar tweeted, “Discussed strengthening (of) our bilateral cooperation and reviewed regional developments. Thanks him (Javad Zarif) for his gracious hospitality.”

A productive meeting with FM @JZarif during a stopover in Tehran. Discussed strengthening our bilateral cooperation and reviewed regional developments. Thank him for his gracious hospitality. pic.twitter.com/Ec9sqO5I6U

EAM Jaishankar is the second senior Indian Cabinet Minister to land in Iran in less than a week after Defence Minister Rajnath Singh made a stopover in Iran on Sunday for talks with his Iranian counterpart Brig Gen Amir Hatami.

India is trying to work more closely with Iran at the time when the situation is fast evolving in Afghanistan where the US planned exit from Kabul will give the Taliban a chance to make a stake in governance. It should be noted that India along with Iran and Russia had collaborated to safeguard their interests by supporting the Northern Alliance when Taliban was in power between 1996 and 2001.

In the course of his stopover at Tehran, Jaishankar and his Iranian counterpart also discussed the important regional issues and this is what Javad Zarif confirmed in his tweet, stating, “Pleased to host my Indian counterpart Dr S Jaishankar in Tehran for talks today. Discussed expansion of bilateral relations and trade, and exchanged views on important regional issues. Our active engagement with our neighbourhood is our top priority.”

Pleased to host my Indian counterpart @DrSJaishankar in Tehran for talks today.

Our active engagement with our neighborhood is our top priority. pic.twitter.com/03F8F9VBdb

India and Iran share warm relations between them despite geo-political tension in the middle-east region. EAM Jaishankar had himself visited Iran in December 2019 and had spoken to Iranian Foreign Minister Zarif in April. However, this was his first visit abroad since foreign travel by ministers was curtailed by the Covid-19 pandemic.