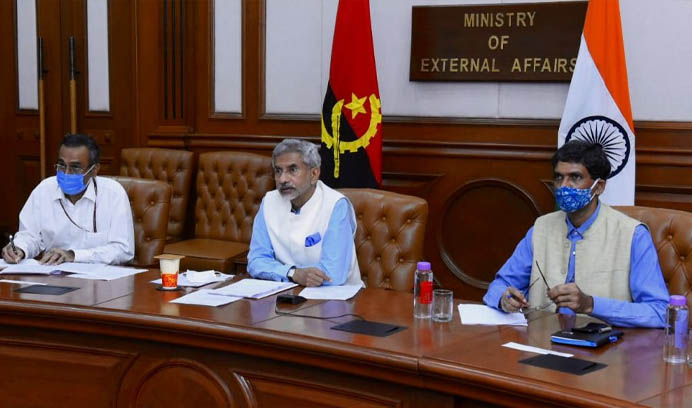 India led by External Affairs Minister S Jaishankar and Angola headed by its Minister of External Relations, Ambassador Tete Antonio reviewed the entire spectrum of bilateral relations in the areas of political, economic, trade and investment, defence and security and development cooperation.

Both sides signed three agreements during the Joint Commission meet and they include 1) Agreement on visa exemption for holders of diplomatic, official and service passports 2) Cooperation in the field of Health, 3) Cooperation between the Ministry of External Relations of Angola and Sushma Swaraj Institute of Foreign Service.

Both sides also agreed to encourage Indian investments in Information Technologies and telecommunications and cooperate in the field of space so as to benefit the Angolan health and education sectors.

The Joint Commission noted that Angola-India development partnership could be further strengthened through lines of credit and buyer's credit arrangements to enhance the capacity of Angolan entities in areas like agriculture, defence, energy, industry, and sustainable water projects, health and pharmacy.

During the meet, both sides also exchanged views on regional and global developments of mutual interest, including counter-terrorism and security during the meeting which was held in a warm and cordial atmosphere.

The two Ministers satisfactorily acknowledged the excellent bilateral cooperation between the two countries and reaffirmed their commitment to strengthen bilateral ties based on the principles and values of democracy.

The two sides noted that bilateral exchanges had acquired a renewed push, following the meeting between Prime Minister Narendra Modi and President João Lourenço at Johannesburg in July 2018 on the sidelines of the BRICS summit.