3 key petroleum projects to bring about development and employment in Bihar: PM Modi 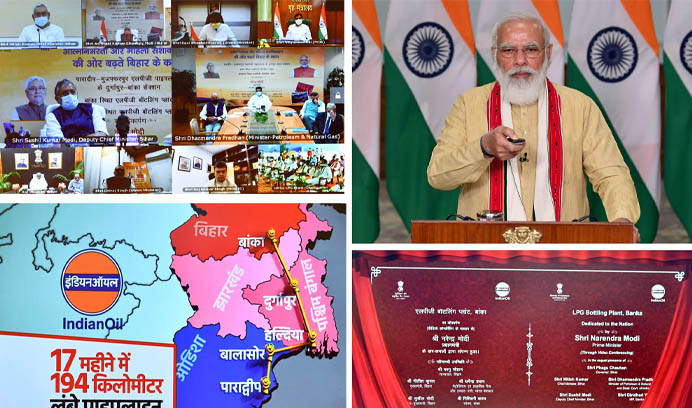 Prime Minister Narendra Modi has dedicated to the nation three key projects in Bihar related to the petroleum sector. The projects include the Durgapur-Banka section of the Paradip-Haldia-Durgapur Pipeline Augmentation Project and two LPG Bottling Plants. PM Modi said the special package was announced for Bihar a few years ago, with focus on the state’s infrastructure. He said the special package for Bihar had 10 big projects related to petroleum and gas worth Rs 21,000 crore.

Drawing focus on eastern India, PM Modi said there is neither a shortage of power of labor in eastern India, including Bihar, and nor it lacked natural resources. “Despite this, Bihar and East India remained behind in terms of development for decades and suffered endless delays due to political, economic reasons and other priorities.” Since road connectivity, rail connectivity, air connectivity, internet connectivity were not a priority earlier, gas-based industry and petro-connectivity could not be imagined in Bihar.

PM Modi pointed out that development of gas based industries was a major challenge in Bihar due to it being a landlocked state, thus lacking resources related to petroleum and gas which are otherwise available in the states adjacent to the sea. He said gas based industry and petro connectivity have a direct impact on people’s lives, on their standard of living and also create millions of new employment opportunities. The prime minister said that the Bhagiratha effort to connect eastern India with Paradip on the eastern seaboard and Kandla on the western seaboard began under the Pradhan Mantri Urja Ganga Yojana. As such, seven states will be connected through this pipeline, which is about 3,000km long, of which Bihar also has a prominent role.

Moreover, the line from Paradip-Haldia will be further extended to Patna, Muzaffarpur and the pipeline coming from Kandla which has reached Gorakhpur will also be connected to it. The gas pipelines had brought about the installation of big bottling plants in Bihar. PM Modi said Bihar is creating thousands of new jobs from the laying of this gas pipeline to the new industries based on the energy from the pipeline.