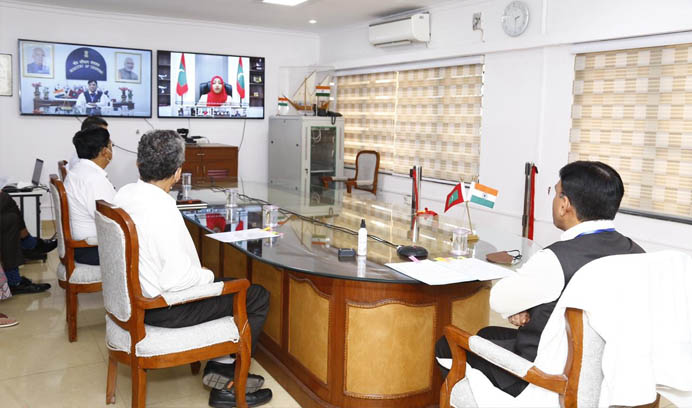 In a landmark development in regional connectivity, a direct cargo ferry service was, for the first time, launched between India and Maldives on Monday.

With this, a new chapter began in the connectivity initiatives in the Indian Ocean Region.

It should be recalled that commencement of the cargo ferry service between India and Maldives was announced during External Affairs Minister S. Jaishankar’s virtual meeting with the Foreign Minister of Maldives on August 13.

In its maiden voyage, a vessel with a capacity of 200 TEU and 3000 MT of break bulk cargo will sail from Tuticorin to Kochi today, from where it will proceed to Kulhudhuffushi port in North Maldives and then to Male port.

It is scheduled to reach Kulhudhuffushi on September 26 and Male on September 29. This ferry service, being operated by the Shipping Corporation of India, will run twice a month and will provide a cost effective, direct and alternate means of transportation of goods between India and Maldives.

Speaking on the occasion, Minister Mandaviya noted that this service is another milestone in the comprehensive bilateral relations between India and Maldives.

He noted that this direct cargo service will further cement the close ties between India and Maldives by enhancing people-to-people contact and boosting bilateral trade.

On the other hand, Minister of Transport and Civil Aviation of Maldives Aishath Nahula expressed her deep appreciation for the launch of the service as reflective of the close ties of friendship and cooperation between the two countries. Maldives is making concerted efforts to revitalize the economy of Northern Maldives.

It is understood that in order to give financial incentives, the Maldives Majlis has approved a 50 percent reduction in custom duties for import items cleared at Kulhudhuffushi port. India has also been assisting Maldives in developing its Northern region, through a number of bilateral projects initiatives.

The ferry service between the two countries will herald direct connectivity for movement of cargo between India and Maldives and thereby give a boost to bilateral trade.

However, despite geographical proximity, India is currently the 4th largest trade partner of Maldives.

Sources say the island country imports more from UAE, China and Singapore implying that bilateral trade with India is not commensurate with its potential.

India’s bilateral trade with Maldives hovered around US$ 280 million annually for some years; it stood at US$ 286.85 million in 2019.

With the launch of direct ferry service between the two neighbouring countries, not only transportation cost will be reduced, it also provides a timely, short and cost effective means of shipment of goods from India to Maldives and thereby, incentivizing more trade between the two countries.

The ferry has a cold storage facility, which will also allow more exports from Maldives of tuna fish and other marine food items which are a specialty of Maldives.

In March-April this year, FICCI’s Kerala State Council conducted a study on the viability of a ferry service between India and Maldives. The study found that for 27 principal import items of Maldives, India’s share of imports is well below their potential.

Since Maldives is a 100 percent import dependent country, improved connectivity between India and Maldives will help boost bilateral trade and help economic activity in Maldives, already reeling under the disruption brought about by the Covid-19 pandemic.

The Covid-19 crisis has drawn the attention of the world towards resilient supply chains. In May-June this year, while Maldivian imports have fallen 50 percent, India has become the 2nd largest exporter to Maldives. India has, therefore, proven that it can provide supply side security to the Maldives during such uncertain times.

A number of bilateral projects are in the pipeline, owing to which export of construction material and other commodities from India to Maldives is bound to rise in the coming months.

This includes the Greater Male Connectivity Project (under US$ 400 million LOC and US$ 100 million grant), projects under the US$ 800 million Line of Credit.