'New Delhi should counter Beijing's attempts to humiliate it' 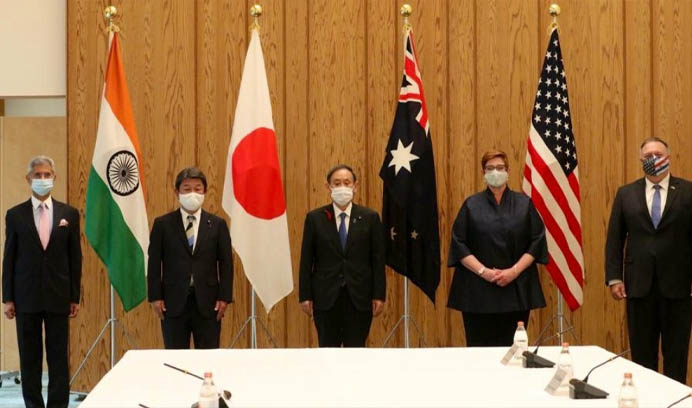 Be it the present situation or the 1960s, China has never missed a chance to humiliate India, either with its unlawful maps or by its definition of the Line of Actual Control. However, India has gained support from its international allies to fight back against China and has prepared well for the challenges from China.

Writing in Hindustan Times, the former Foreign Secretary of India Maharajakrishna Rasgotra says that China’s hostility has energized the Quad. Referring to the meeting in Tokyo earlier this month of Quad’s foreign ministers, Rasgotra said that India has discussed the potential and possibility of acting as a balancer against China in the Indo-Pacific region with the other three members.

Reiterating that Quad is preparing well for the Indo-Pacific security, the diplomat said the meeting indicated its role in developing the region’s infrastructure and connectivity, establishing new, resilient supply chains to support regional industry and trade, and promoting cooperation in technology.

Further, Rasgotra noted that the United States officials have also come in strong support of India. Deputy Secretary in the state department, Stephen Biegun, during his recent Delhi visit, spoke of a fundamental US-India alignment “along shared security and geopolitical goals”. Secretary of State Mike Pompeo has also voiced strong support for India.

Not only the Quad, the diplomat said that US-India 2+2 talks are also important for preparing for Indo-Pacific security. In addition to signing the Basic Exchange and Cooperation Agreement, will focus on the gravity of the present crisis and India’s role in ensuring peace and security of the Indo-Pacific regime, he said.

The former foreign secretary said that the 2+2 meeting, next week, will, no doubt, take note of the gap between India’s resources and its enhanced security role in the Indo-Pacific region.

Writing in Hindustan Times, the diplomat says that China aims to humiliate India’s leaders and damage the economy through predatory trade practices. However, India’s growing international support will hit China back with a stronger diplomatic force