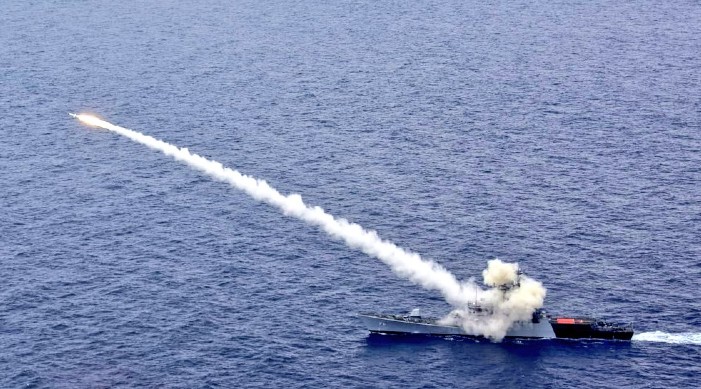 The Indian Navy on Friday successfully flight-tested the Anti-Ship Missile (AShM) fired by the Indian Navy’s Guided Missile Corvette INS Kora, hitting a target in the Bay of Bengal.

The spokesperson of the Indian Navy took to Twitter and said, “#AShM fired by #IndianNavy's Guided Missile Corvette #INSKora hits the target at max range with precise accuracy in #BayofBengal. Target ship severely damaged & in flames.”


On October 23, the Indian Navy had shared a video showing an AShM launched by its Missile Corvette INS Prabal with deadly accuracy at maximum range and sinking the target ship.


India also successfully flight-tested BrahMos supersonic AShM during the western fleet exercises on October 18. The missile, which was launched from INS Chennai, destroyed the target completely.

Since September 7, India has tested over 12 indigenously made missiles. The test-firing of these missiles comes at a time when there is a standoff with China which also has rising interests in the strategically crucial Indian Ocean Region.

Senior officials had earlier stated that the missiles tested during this period are crucial for land-attack capability and some for air and maritime security.

In order to deter additional aggression from Beijing and strengthen defense cooperation with other countries in the maritime security domain, the Malabar exercise, an annual maritime exercise that rotates between the Indian Ocean and the Western Pacific, this year, will see the participation of Australia.

The Malabar exercise 2020, to be held later this year, has been planned in a ‘non-contact-at-sea’ format. The participants of Exercise Malabar 2020 collectively support free, open, and inclusive Indo-Pacific and remain committed to a rules-based international order.

The recent extensive testing of missiles and the participation of Australia in the upcoming Malabar exercise indicate that the Indian Navy is prepared well for any unexpected attacks from Beijing.


He had interacted with personnel and emphasized key issues of repairs, maintenance, spares support, and op-logistics for afloat units to sharpen their war-fighting capabilities. He had also reiterated aspects of cyber-security, force protection against terrorist attacks, asymmetric warfare, and exhorted all personnel to maintain the highest level of alertness.