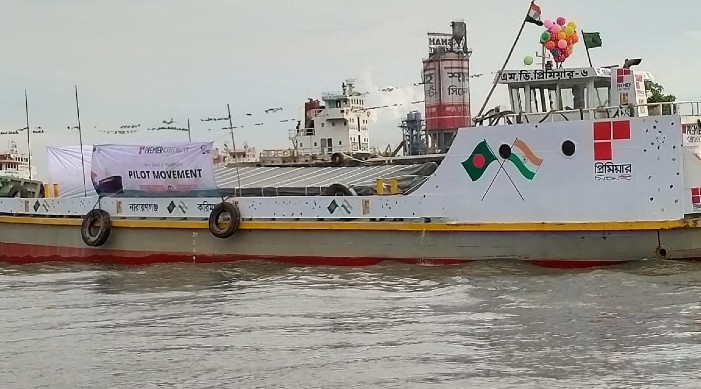 In a significant step towards boosting India-Bangladesh maritime connectivity and trade ties, the first-ever commercial shipment from Bangladesh has embarked on its journey Assam, India via the river route. The shipment will reach Karimganj on November 7.


India has taken several steps to improve connectivity with Bangladesh and this comes as another significant step that will boost connectivity and trade between both sides.


Trade on the water... moving ahead https://t.co/JHTmTDFGyZ


Earlier, in July, the first trial movement of a container ship carrying steel and pulses from Kolkata to Agartala through Chattogram Port of Bangladesh was flagged off opening huge opportunities for trade.

It was for the first time that Bangladesh had allowed its ports to be used as a transit for cargo movement to India's north-eastern states. Access to Chittagong and Mongla seaports in Bangladesh is critical to opening shorter and alternative routes to connect the Northeast region with the rest of India. It drastically cuts short the distance between Kolkata and Agartala via Assam from about 1600km to just about 450 km.

In 2015, India and Bangladesh had signed a coastal shipping agreement. Further, efforts have been made to expand maritime connectivity between both sides. India is helping Bangladesh in increasing the navigability of the rivers by assisting in the dredging of its waterways in selected stretches.

In May 2020, a new port of call and routes has been added to an already available protocol on Inland Water Trade and Transit. Currently, the Inland water protocol has a total of 10 routes and 11 ports of calls on each side.

The India-Bangladesh connectivity is not only aimed at improving the movement of goods and people bilaterally but also has a vision for deepening sub-regional cooperation, primarily Bangladesh, Bhutan, India, and Nepal (BBIN) quadrilateral cooperation.