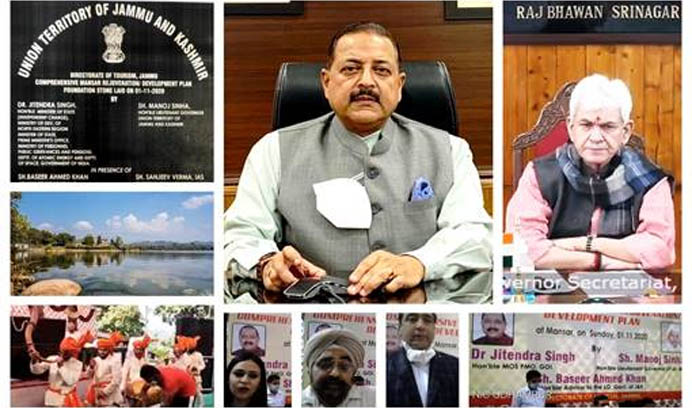 This is likely to generate about 1.15 crore man-days of employment

In order to put the newly formed Union Territory of Jammu and Kashmir on the path of development, India has initiated a number of projects. In this sequence, India has launched the long-pending Comprehensive Mansar Lake Rejuvenation Plan after a wait of 70 years.

Speaking after the e-foundation ceremony, Union Minister Dr Jitendra Singh said that the last 6 years had seen more such projects than the number initiated in the earlier seven decades.

He said once the plans are implemented, the number of tourists is likely to increase to 20 lakhs from the present 10 lakhs. The Mansar Rejuvenation Plan alone is likely to generate about 1.15 crore man-days of employment and will generate income of about Rs 800 crore per year.

The virtual inauguration was also attended by J&K Lieutenant Governor Manoj Sinha who said that Mansar is of immense importance from the pilgrimage as well heritage point of view beyond being the most scenic attraction due to vast Mansar Lake and its flora and fauna.

Dr Jitendra Singh said on lines of Namami Ganga and Ganga cleaning project, Udhampur district has got two projects for River Devika and Mansar Lake project. Both the projects will cost Rs 200 crore. In fact, Udhampur-Doda-Kathua is possibly the only Lok Sabha constituency in the country which has received 3 Medical Colleges in 3 years, he said.

He said that Shahpur Kandi Irrigation Projects which were revived after 4 decades with the personal intervention of Prime Minister Narendra Modi and the Ujh multipurpose project have also been revived after over 5 decades.

In the same vicinity, he said, North India’s first Bio-tech Industrial Park and the first ever Seed-Processing Plant are also coming up, which will generate job opportunities as well as sources of livelihood and research.

On a similar note, the Katra-Delhi expressway corridor, the work for which has been started and also the work on the extensions of four lanes, to a Jammu national highway, into 6 lanes has also been started.

Apart from that, India has also started the work on the world’s highest railway bridge that is being constructed in Reasi. A new highway project from Sudhmahadev via Marmat to Khileni has also started, he said.

Several projects have been started in the far-flung areas like centrally funded college in Paddar in Kishtwar, an airport is also being constructed in Kishtwar under the UDAN Scheme. Poghal-Ukhraj and Marmat got their first ever Degree College and a post office has been constructed in Gandoh.

LG Sinha said that tourism contributes to seven per cent of the total GDP of Jammu and Kashmir, but since COVID-19 pandemic, the tourism sector has been hit badly.

After August 5, 2019, there is a visible change in every field, Jitendra Singh said