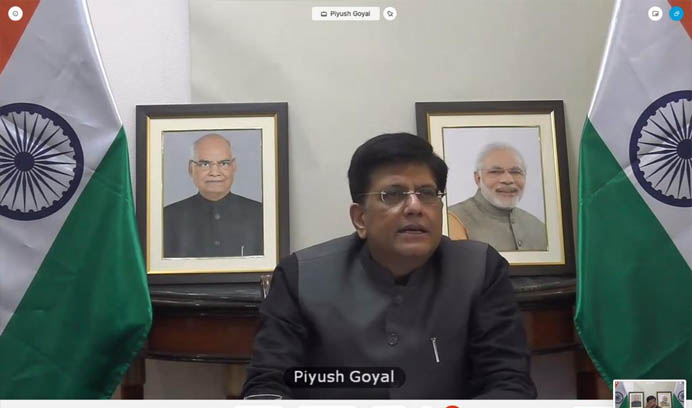 The UAE has been a consistent investor in diverse sectors of the Indian economy and is a valuable partner in development, Minister of Commerce and Industry Piyush Goyal said

India and the UAE concluded the eighth meeting of the High-Level Joint Task Force on Investments on Tuesday. Both sides discussed ways to encourage investment and cooperation to stimulate economic activity amid Covid-19.

During the meeting, both sides agreed upon the need to further explore ways to facilitate investments in key Indian and UAE sectors with the potential for economic growth and to maintain their dialogue and further build on the considerable achievements of the Joint Task Force, as per an official release.

Co-chaired by Minister of Commerce and Industry Piyush Goyal and Member Executive Council of the Emirate of Abu Dhabi Sheikh Hamed bin Zayed Al Nahyan, the meeting saw discussions on a wide range of sectors and subjects of mutual interest.

“These include issues relating to anti-dumping duties and measures, as well as any tariff and regulatory restrictions. To this end, both sides agreed to coordinate efforts and promote mutual cooperation at the highest official levels in areas of anti-dumping and to consider these issues promptly with the objective of seeking mutually beneficial solutions,” the joint statement read.

Speaking virtually at the event, Goyal said, “This Joint Task Force is an integral component of our comprehensive strategic partnership with the UAE. India is on an ambitious growth path and has significant headroom in various sectors of its economy. The UAE has been a consistent investor in diverse sectors of the Indian economy and is a valuable partner in our development journey. We attach high priority to the UAE investments and have been consistently taking progressive steps to ease the path for UAE investors.”

According to the joint statement, both sides reviewed the existing UAE special desk (‘UAE Plus’) and the Fast Track Mechanism created in 2018 to facilitate investments and to resolve any challenges experienced by UAE investors in India.

In recognizing the critical importance of civil aviation to the economies of both States, the two sides agreed that the two civil aviation authorities should continue to work together on a priority basis, for their mutual benefit to ensure speedy normalization of air transport operations between the two countries.

Further, the two sides discussed issues related to the development and operation of UAE-based funds to invest in India, including in the light of SEBI Foreign Portfolio Investor Regulations 2019. The Indian side agreed to look into these issues to facilitate further direct investments of UAE-based funds into India and seek mutually beneficial solutions in that regard.

The two sides noted the positive outcomes achieved by the Joint Task Force and expressed satisfaction at the level of bilateral trade and investment to date.

Concluding the meeting, Sheikh Hamed bin Zayed Al Nahyan said, “The past decade has witnessed a positive transformation in the economic relationship between the UAE and India. I believe that the commitment of this Task Force over the past eight years has been central to that success. Although recent months have been difficult for us all, we have today set out an ambitious agenda for the next stage of our economic co-operation. I am convinced that we can return to significant growth in our bilateral trade and investment in the years ahead.”

The Joint Task Force was created in 2012 as a crucial forum for further deepening the already strong economic ties between the UAE and India. The mechanism has assumed greater importance as the two countries entrench the Comprehensive Strategic Partnership Agreement signed in January 2017.