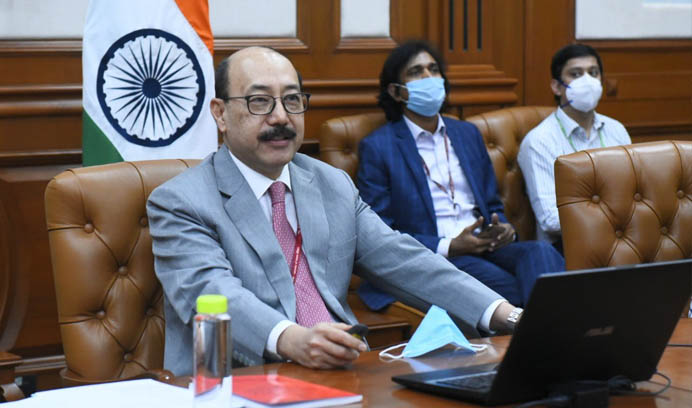 India is exploring the possibility of conducting phase III trials of COVID-19 vaccines in some of its partner countries, Foreign Secretary Harsh V Shringla has said. "We may also go for joint production of vaccines in some countries," he said while briefing heads of diplomatic missions and international organisations on Friday.

India had already conducted online training sessions for nearly 90 participants from 8 neighbouring countries to develop capacity in clinical trials and clinical practices, he noted, adding that more programmes can be conducted if needed.

Referring to India being approached by several countries for receiving the supply of COVID-19 vaccines, Shringla reiterated Prime Minister Narendra Modi's commitment that "India’s vaccine production and delivery capacity will be used to help all humanity in fighting this crisis".

He added that India will also help interested countries in enhancing their cold chain and storage capacities for the delivery of vaccines.

The Foreign Secretary's briefing was aimed at providing an outline of the COVID-19 vaccine development programme in India, the delivery system management and international cooperation in this regard. The participants were also informed that the government was planning to take a delegation to visit India's vaccine and diagnostic facilities in Pune.

Shringla pointed out that Europe, from where he returned on Thursday after a visit, was witnessing a second wave of the pandemic. In India, however, the daily case load had fallen to below 50,000 from around 100,000 a few weeks ago. "We remain vigilant though and continue to devise and re-devise strategies based on our experiences across India," Shringla said.

India’s recovery rate had gone up to 91.96 %, as on 3 November 2020, due to increase in testing numbers, contact tracing, effective isolation protocol, efficient use of hospital beds, increased availability of medical equipment, testing kits and sustained public awareness campaign.

He added that the country's case fatality rate had dropped to 1.49 %. "With progressively falling positivity rate, testing has worked as an effective tool to limit the spread of infection," he pointed out.

India had added enormous production capacity in PPEs, testing kits, and medicines and these were also being shared with other countries, the Foreign Secretary noted.