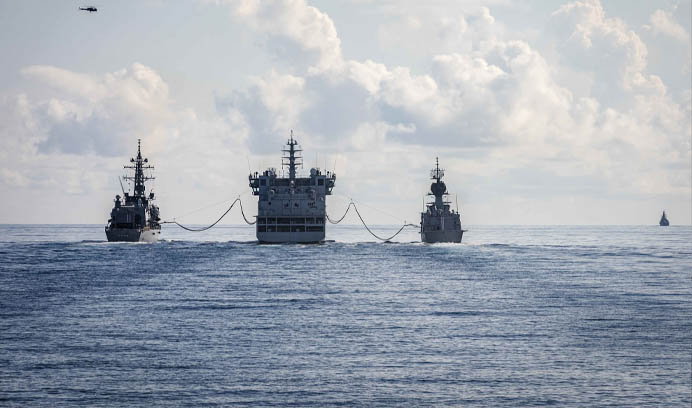 A view of the fuel replenishment operation. (Source: Twitter @ USPacificFleet)

The Indian Navy demonstrated the ‘Underway Replenishment (UNREP)’ today during the ongoing Joint Naval Exercise Malabar 2020 in which all Quad Dialogue members India, Japan, Australia and the United States are participating together for the first time.

Underway replenishment is an activity through which fuel, ammunition, supplies and personnel are transferred from one ship to another while they are at sea. It is done to save time and is useful when ships are deployed for a longer duration.

The transfer is not easy, though INS Shakti refuelled warships simultaneously and the Navy called it “like a walk in the park.”

The US Pacific Fleet also tweeted images of the "replenishment-at-sea".

Phase-1 of the 24th edition of the Naval Exercise Malabar Exercise 2020 began on November 3 off the coast of Visakhapatnam in the Bay of Bengal.

The maritime exercise is a way to showcase the high-levels of synergy and coordination between the friendly navies.
The sides demonstrate a vivid display of their shared values and commitment to an open, inclusive Indo-Pacific and a rules-based international order.

This time, the exercise is being conducted as a ‘non-contact, at sea only’ exercise due to the COVID-19 pandemic. The second phase of Malabar Exercise 2020 will be carried out in the Arabian sea in mid-November.