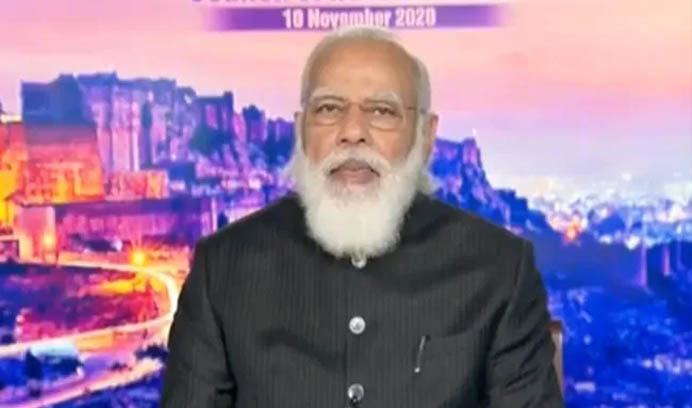 Leading India at the first virtual Shanghai Cooperation Organisation’s heads of state summit, Prime Minister Narendra Modi on Tuesday lashed out at China and its all-weather friend Pakistan for working against the spirit of the group’s charter.

First of all, he slammed China, saying to deepen connectivity it is essential that each other’s sovereignty and territorial integrity is respected.

“India has a close cultural and historical relationship with the SCO region. Our ancestors kept this shared historical and cultural heritage alive with their tireless and constant contacts. Steps such as the International North South Transport Corridor, Chabahar Port, Ashgabat Agreements reflect India's strong resolve towards connectivity. India believes that to further deepen connectivity, it is necessary to carry forward with the core principles respecting each other's sovereignty, and territorial integrity,” the Prime Minister said in his address at the summit.

Chaired by Russian President Vladimir Putin, this was the first time when Prime Minister Modi shared a platform with Chinese President Xi Jinping since the India-China standoff at the Line of Actual Control deteriorated the relations between the two countries.

Without taking Pakistan’s name, the Prime Minister also attacked Islamabad for its attempt to raise bilateral issues at the various international forums, including SCO.

“India strongly believes in peace, security and prosperity. We have always voiced opposition to terrorism, illegal arms smuggling, drugs and money laundering. India is steadfast in its commitment to work under the SCO as per the principles laid down in the SCO Charter,” the Prime Minister said.

“But it is unfortunate that repeated attempts are being made to unnecessarily bring bilateral issues to the SCO agenda, which violate the SCO charter and Shanghai spirit. Such efforts are contrary to the spirit of consensus and cooperation that defines SCO,” the Prime Minister added.

The Prime Minister also highlighted the imperative of a reformed multilateralism to meet the expectation of a world suffering from the social and financial after-effects of the pandemic. India, as a non-permanent member of the UNSC, beginning from January 1 2021, will focus on the theme of ‘reformed multilateralism’ to bring about desirable changes in global governance.

He also extended full support to observing the 20th anniversary of SCO in 2021 as the “SCO Year of Culture” and spoke of India’s own initiatives to hold the first SCO exhibition on Shared Buddhist Heritage to be organized by National Museum of India, SCO Food Festival in India next year and the translation of Ten regional language literary works into Russian and Chinese.

The Prime Minister expressed India’s readiness to host the next regular Meeting of SCO Council of Heads of Government on November 30, 2020 in virtual format. India has also proposed to set up a Special Working Group on Innovation and Startups and a Sub Group on Traditional Medicine within SCO. He elaborated on India's vision of a “Aatma Nirbhar Bharat” (Self-reliant India) in the post-pandemic world that could prove to be a force multiplier for the global economy and the economic progress of the SCO region.

Prime Minister Modi also congratulated President Emomali Rahmon of the Republic of Tajikistan for assuming the chairmanship of SCO next year and assured full cooperation from India.