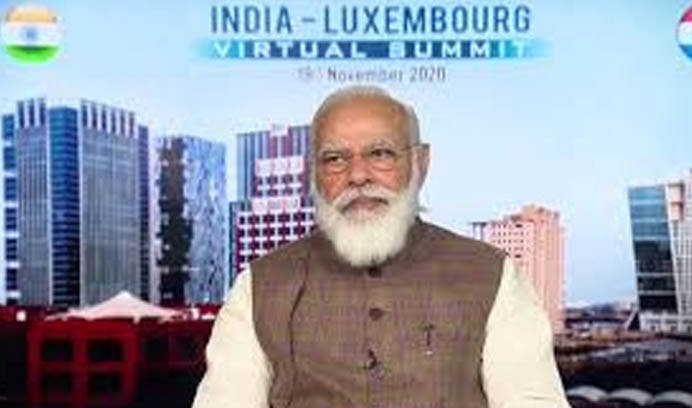 Prime Minister Narendra Modi on Thursday held a virtual summit with Prime Minister of Luxembourg Xavier Bettel. This was the first stand-alone summit between India and Luxembourg in the past two decades.

Speaking on the occasion, Prime Minister Modi pitched high for ramping up of economic engagement between India and Luxembourg, the third largest source of Foreign Portfolio Investments (FPI) for the country.

“There is a huge potential to expand economic engagement between the two countries. We have good cooperation in areas like steel, financial technology, digital domain, but there is a massive possibility of taking it forward,” Prime Minister Modi said at the meeting with his Luxembourg counterpart Bette.

The two Prime Ministers also took note of the long-standing cooperation between India and Luxembourg in the steel sector and the leaders called upon businesses, including SMEs and startups, to explore further opportunities for expanding the economic relationship.

They also noted that Luxembourg companies were taking a growing interest in India’s various initiatives related to the environment, clean energy and sustainable technologies, including the Clean Ganga Mission.

The leaders looked forward to the 17th Joint Economic Commission between India and the Belgium-Luxembourg Economic Union to review the economic and trade relations.

The leaders also exchanged views regarding the ongoing efforts to make supply chains more resilient, diversified, responsible and sustainable. They noted that over the last decades, supply chains have become increasingly complex, intertwined and dependent on a diverse set of stakeholders located across the globe.

The two leaders agreed that the challenge of future-proofing global supply chains will be to ensure a smooth interplay between interdependence and greater resilience, requiring notably an increased coordination among all stakeholders involved in the value chain.

During the summit, both leaders underscored the importance of green financing to promote green growth and sustainable development. In this background, the two Prime Ministers welcomed the signing of cooperation agreements by the Luxembourg Stock Exchange with State Bank of India and the India International Stock Exchange.

Notably, Luxembourg is one of the most important financial centers globally. Several Indian companies have raised capital by issuing Global Depositary Receipts (GDRs) at the Luxembourg Stock Exchange.

The two leaders, during the summit also shared the view that the proposed agreement between the regulatory authorities “Commission de Surveillance du Secteur Financier” (CSSF) and the Securities and Exchange Board of India (SEBI) would deepen bilateral cooperation in the financial sector.

In this context, they expressed their commitment for further strengthening cooperation in the area of financial services. Prime Minister Bettel highlighted that Luxembourg, as a leading international financial centre in Europe, can act as an important bridge to help connect India’s financial services industry with international markets and reach European and global investors.

The two leaders acknowledged the role of the financial industry to support the global transition towards a greener and more sustainable economy. In this regard, they agreed to identify and develop joint initiatives to promote and facilitate the development of sustainable finance. Moreover, the two Prime Ministers underlined the importance of innovation and digitization in the financial sector and noted the potential to connect the financial technology and start-up communities of both countries.