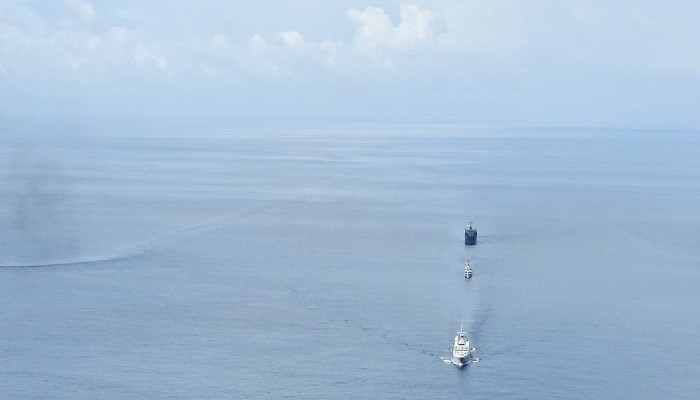 It comes a day after India, Singapore and Thailand concluded SITMEX naval exercise in the Andaman sea

Locked in a bitter row with China, India is leaving no stone unturned to prove its military prowess in the Indian Ocean with joint maritime exercises one after another country. All eyes are now on the 27th edition of India-Singapore bilateral naval exercise SIMBEX-20 starting on Monday in the Andaman Sea.

The three-day exercise being hosted by India will go on till November 25 and comes just a day after the trilateral exercise between India, Singapore and Thailand SITMEX-20 came to an end.

Apart from that, IN submarine Sindhuraj and P8I maritime reconnaissance aircraft are also participating in the exercise.

On the other hand, the Republic of Singapore Navy (RSN) is being represented by the ‘Formidable’ Class frigates Intrepid and Steadfast with integral S70B helicopter and Endurance Class Landing Ship tank Endeavour in the exercise.

In an official statement, the Ministry of Defence informed that the exercises being conducted this year include advanced surface, anti-air warfare and anti-submarine warfare exercises including weapon firings, over three days of intensive joint operations at sea.

This time, the exercise is being held on ‘non-contact, at sea only’ basis due to COVID-19, however, the conduction of the exercise amid the pandemic the high degree of mutual trust and confidence, synergy and cooperation in the maritime domain between the two friendly navies and maritime neighbours.

Happening every year since 1994, SIMBEX is aimed at enhancing mutual interoperability and imbibing best practices from each other. The scope and complexity of these exercises has increased steadily over the past two decades to include advanced naval drills covering a wide spectrum of maritime operations.

“SIMBEX series of exercises exemplify the high level of coordination and convergence of views between India and Singapore, particularly in the maritime domain, towards enhancing the overall maritime security in the region and highlight their commitment to a rules-based international order,” the ministry said in a statement.

Earlier, India participated in the 30th edition of the India-Thailand Coordinated Patrol (Indo-Thai CORPAT). The three-day exercise which began on November 18 contributed towards Indian Navy’s efforts to consolidate interoperability and forge strong bonds of friendship with the Royal Thai Navy.

Similarly, an exercise was undertaken by the navies of India and Bangladesh on October 4 and 5 this year. It was the third edition of Indian Navy-Bangladesh Navy Coordinated Patrol (CORPAT) in Northern Bay of Bengal.

Prior to that, India also participated in the second phase of Malabar Exercise 2020, which was undertaken by India and other members of Quad grouping namely Australia, the USA and Japan in the Arabian Sea from November 18.

The first phase was held in the Bay of Bengal in early November. The second phase lasting four days continued in the Arabian Sea and involved two aircraft carriers, along with other ships, submarines, and aircraft of the participating navies.

With India facing China’s hostility at the Line of Actual Control (LAC), these exercises are being seen by many as India’s effort to increase its footprint in the Asia-Pacific region.