Ecuador in search of ‘efficient, secure and affordable’ vaccine: Envoy 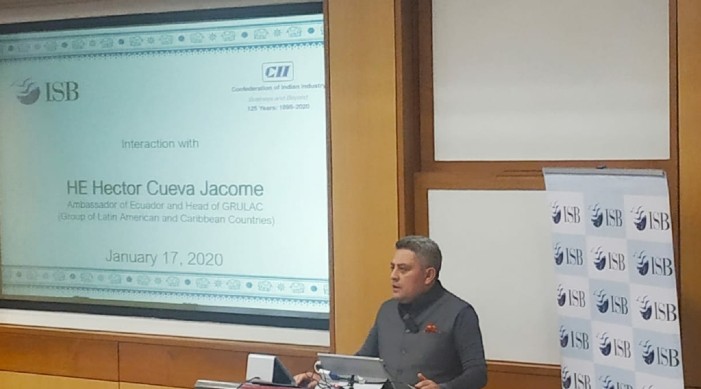 Ecuador’s Ambassador to India Hector Cueva Jacome has reposed his faith in an Indian vaccine as the Latin American nation looks for an ‘efficient, secure, and affordable’ vaccine.

Expressing faith in the Indian vaccine industry during an interview with WION, the Ecuadorian envoy noted that 33 per cent of global vaccines are produced in India and the pharmaceutical companies like Bharat Biotech and Serum Institute of India (SII) are well known across the world.

Jacome and his wife, who visited Hyderabad last month, are part of the third phase of Covid-19 vaccine trials of Covaxin in India. The Ecuadorian ambassador is the first foreign envoy to be part of the vaccine trials in the country after Covaxin developed by Bharat Biotech, recently got emergency use approval from India’s drug regulator.

Jacome confirmed that the couple have not exhibited any “secondary effects” of the vaccine. They called the entire exercise ‘safe.’ The decision to participate in the trials was intended to show to Ecuadorians back home the trust and confidence that an Indian vaccine will work, Jacome said in the interview.

He told WION that the Indian vaccine is affordable for developing countries including his own and the rest of the South American continent that is facing an economic disaster due to the pandemic and are in need of cheaper testing and vaccines for the people.

Corroborating the excellent bilateral relations between Ecuador and India that were strengthened during the pandemic with New Delhi supplying medicines to Ecuador, the envoy suggested that India after addressing its own need for vaccines must go forward and help other countries with vaccines.

India alongside Thailand, Vietnam, Cambodia, Kenya, and Rwanda had set a good example of management of Covid-19, the Ecuadorian envoy said during the course of the interview.

Responding to a question, he pointed out that of a total 11 million active cases in India, there were only 3 lakhs active cases, and therefore a high recovery at 97 per cent. India’s death rate of the COVID-19 virus is only 1.46 percent, one of the lowest death rates in the world on account of the virus, he added.