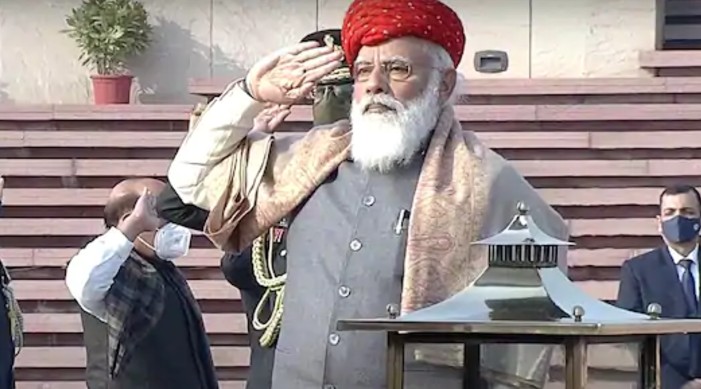 Prime Minister Narendra Modi greeted the nation on the occasion of the country's 72nd Republic Day.

Using the occasion to greet the people both in Hindi and English, he tweeted, “देशवासियों को गणतंत्र दिवस की ढेरों शुभकामनाएं। जय हिंद! Wishing all the people of India a Happy Republic Day. Jai Hind!”

This year’s Republic Day was very different from previous years as it is for the first time that it will be held amid the ongoing Covid-19 pandemic. The country saw a scaled-down Republic Day parade at Rajpath with a shorter route, fewer spectators, no children below the age of 15 years. Only around 25,000 spectators were allowed to witness the parade.

The entry of general people had been banned and only the invited guests were allowed to be present. Vehicular movement in the national capital was majorly affected, especially in central Delhi and the peripheries of the city, owing to the Republic Day parade in the morning, followed by the farmers’ tractor parade.

Earlier, British Prime Minister Boris Johnson greeted India on its Republic Day. In a video message, he said India was celebrating the birth of an extraordinary Constitution that established India as the biggest sovereign democracy in the world. He reiterated his plan to visit India in the coming months.

The British Prime Minister was due to be in New Delhi as the Chief Guest at the annual parade to mark the India's 72nd Republic Day but had to call off the visit to focus on the domestic crisis unleashed by the emergence of a new, deadlier variant of coronavirus in the UK at the end of last year.