Fact Check: Gory video of bodies overflowing in a morgue not from India 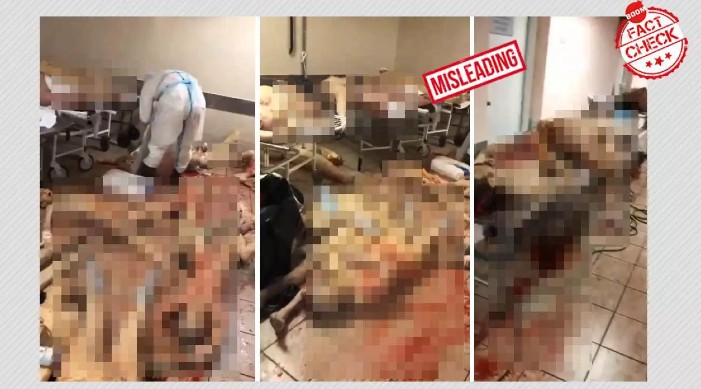 With the second wave of Covid-19, there is another wave, simultaneously going on unchecked, in social media and that is the wave of disinformation

All over social media, there are pictures and videos, which are later carried by various national and international news outlets as well without verifying facts.

An extremely disturbing video of naked bodies, which look like corpses, piled over each other and being attended to by people in protective medical gear, is being shared with the false claim that it shows organ trafficking in COVID-19 patients in India.

We found that the undated clip traces back online to at least November 2020 and is not from India.

After breaking the video into key frames and running a reverse image search, it was found that the same clip has been circulating online on Russian social media and websites since November 2020.

Similar fact check was also run by Syrian fact checker Verify Sy debunking the same viral clip when it was being shared with the false claims that it showed bodies of Syrian detainees whose human organs were harvested by Russian doctors and more false claims that the video is from Brazil and Iran.

Further, according to several Russian news reports, the same clip was circulated on Russian social media claiming it is from a morgue in a hospital in Novosibirsk. The same clip was posted by social activist Rostislav Antonov. Russian website Komsomolskaya Pravda published a report dated November 10, 2021,following Antonov's post.

We found the viral clip circulating on Russian social media websites with the oldest dating back to November 2, 2020.

Not only this, the same clip is being shared with a voiceover in Spanish using the app PicVoice which shows that several false narratives have been attached to the viral video and being circulated.

Verify Sy also pointed out that by observing the video closely at the 11 seconds timestamp, in the corridor, it can spot the Russian alphabet L. Additionally, it had also translated the recording in the original clip where one can hear people conversing in Russian. This indicates the viral clip is from Russia.