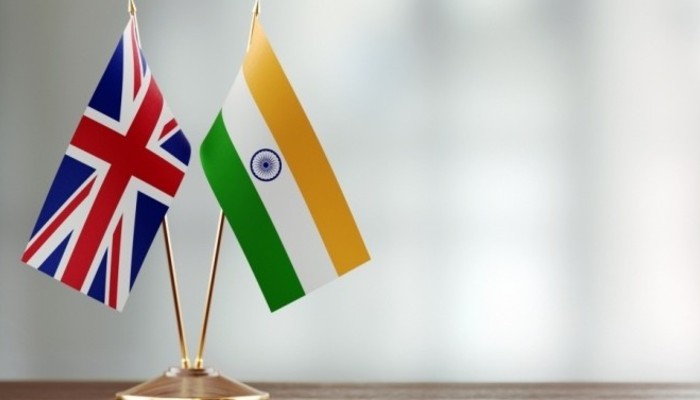 Prime Minister Narendra Modi and UK Prime Minister Boris Johnson on Tuesday met virtually and agreed a common vision of a new and transformational Comprehensive Strategic Partnership between India and UK, underpinned by their shared commitment to democracy, fundamental freedoms, multilateralism and a rule based international order.

They adopted an ambitious India-UK Roadmap to 2030 to steer cooperation for the next ten years.

They emphasized that enhanced India-UK bilateral cooperation can not only reap mutual benefits but also be a global force for good to revive lives and livelihoods, promote peace and prosperity around the world and protect and preserve the planet for future generations.

Both leaders welcomed the launch of the Enhanced Trade Partnership, and announced their intent to negotiate a comprehensive Free Trade Agreement to unlock the full potential of their trade and commercial relationship, boosting jobs, investment and exports, including consideration of an Interim Trade Agreement to deliver early gains.

They agreed to continue removing trade barriers on the path to an FTA, and an ambitious target of more than doubling India-UK trade by 2030.

They welcomed the gains made by their joint investment programmes and the signing of an India-UK MoU on the Global Innovation Partnership to support the transfer of inclusive innovations from India to selected developing countries.

They reiterated the importance of mobilising sustainable finance for infrastructure, and welcomed the progress made by the Green Growth Equity Fund (GGEF) and the India-UK Sustainable Finance Forum.

They welcomed progress under the India-UK strategic collaboration on GIFT City to promote greater links between GIFT City and the UK financial services ecosystem and the creation of a unified regulator in the International Financial Services Centres Authority (IFSCA) as one of the many positive developments in respect of GIFT City.

Both leaders recognised the importance of securing reliable and sustainable supply chains that are resilient to major disruptions like the current pandemic and agreed to support the diversification of global supply chains.

As the world continues to face severe new waves of COVID-19 infections both leaders acknowledged the difficult circumstances caused by the pandemic globally.

They offered their deepest condolences for the loss of lives and expressed deepest sympathy with the families of the victims of this pandemic in India, UK and the rest of the world.

Prime Minister Modi thanked Prime Minister Boris Johnson for the prompt assistance provided by the UK in the form of critical medical equipment for ameliorating the current situation in India.

Both Leaders emphasised that global cooperation and solidarity are key to fighting the pandemic and achieving sustainable and inclusive recovery.

They agreed to expand and enhance the existing UK-India vaccines partnership, highlighting the successful collaboration between Oxford University, Astra Zeneca and the Serum Institute of India on an effective Covid19 vaccine that is ‘developed in UK’, 'Made in India' and 'distributed globally'.

They emphasized that the international community should learn lessons and agreed to work together to reform and strengthen WHO and the global health security architecture to strengthen pandemic resilience.

Both leaders emphasised their shared commitment to an enhanced partnership in science, education, research and innovation and look forward to the next ministerial Science and Innovation Council (SIC).

They welcomed the signing of the new India-UK MoU on Telecommunications/ICT and the Joint Declaration of Intent on Digital and Technology, the establishment of new high-level dialogues on tech, new joint rapid research investment into Covid19, a new partnership to support zoonotic research, new investment to advance understanding of weather and climate science, and the continuation of the UK-India Education and Research Initiative (UKIERI).

Both Prime Ministers agreed to deepen their defence and security cooperation through the India-UK Defence and International Security Partnership framework and welcomed the finalisation of the new logistics MoU.

During the deployment of the UK's Carrier Strike Group in the Indian Ocean Region in 2021, they agreed to hold joint exercises that will deepen cooperation in a region of critical strategic importance to both countries.

They agreed that there is a promising new era ahead for India-UK collaboration on key military technologies including combat aircraft, maritime propulsion system and complex weapons, harnessing the strengths of Indian and British industries, government laboratories and academia to help deliver the next generation of defence and security capabilities through co-development and co-production.

Both leaders reiterated their full support to a free, open, peaceful and secure cyberspace and agreed to strengthen cooperation through an enhanced India-UK cyber security partnership to tackle growing cyber threats and to enhance capacity building on strengthening the security and resilience of critical information infrastructure.

They affirmed their shared vision of an open, free, inclusive and rules-based Indo-Pacific region, underpinned by respect for territorial integrity and sovereignty, rule of law, transparency, freedom of navigation and overflight in the international seas, unimpeded lawful commerce, and peaceful resolution of disputes.

Both leaders condemned in the strongest terms terrorism in all its forms and all those who encourage, support and finance terrorism or provide sanctuary to terrorists and terror groups.

They agreed to continue cooperation through the Joint Working Group on Counter-Terrorism, including on information and intelligence sharing on terror networks and to share experiences on dealing with the growing phenomenon of extremism and radicalization.

Both sides expressed concern at the ongoing violence and targeted assassinations in Afghanistan even as the peace talks are progressing. They agreed that any political solution in Afghanistan should be Afghan-owned and Afghan-led and that the development progress which has been made over the last two decades, including on the rights of women, children and minorities, and constitutional democratic structure and freedoms, should be preserved.

Both sides recognized each other’s extensive development contribution in Afghanistan. They agreed to continue working closely together to contribute to creating the right conditions for a permanent and comprehensive ceasefire leading to a sustainable peace.

UK reaffirmed its support for India’s permanent membership on a reformed UN Security Council. In this context, both countries called for the initiation of text-based negotiations with the aim of achieving concrete outcomes within a fixed timeframe.

The UK also reiterated its support for India’s entry into the Nuclear Suppliers Group.

Both leaders reaffirmed their personal commitment to taking ambitious climate action in pursuit of the goals of the Paris Agreement and the United Nations Framework Convention on Climate Change (UNFCCC) in the run-up to the 26th Conference of Parties and beyond.

They agreed to work together to reach an ambitious, transparent and inclusive negotiated climate outcome at Glasgow. They agreed to step up India-UK collaboration on climate change and low carbon transition through a new partnership on renewables and power, including offshore wind, energy efficiency and storage and electric mobility, and to explore joint work on green hydrogen.

They agreed to announce a green grids initiative at COP26 and to promote climate resilient infrastructure through a new facility for Small Island Developing States under the Coalition for Disaster Resilient Infrastructure and to launch a India-UK Partnership on Forests.

Both leaders reaffirmed that people-to-people contacts provide strength and durability to the bilateral partnership, including the 1.6 million strong Indian diaspora as the living, thriving bridge between the two countries.

They welcomed the signing of the India-UK comprehensive Migration and Mobility Partnership (MMP) and expressed confidence in the benefits it will have in facilitating legal movement of students and professionals, and combating illegal migration and organised immigration crime.

The two Prime Ministers committed to remain closely engaged and invested in each other's security and prosperity. They tasked their Foreign Ministers to undertake an annual Strategic Review of the implementation of the Roadmap and report back to them.